The Back-Seat Murder (1931) by Herman Landon

Herman Landon was a Swedish-born American writer best remembered for his pulp stories and novels about a reformed arch-criminal, "The Gray Phantom," but how did the obscure, largely forgotten Landon appear on my radar – since he was even omitted from the GADWiki. Well, Robert Adey listed two of his regular mystery novels in Locked Room Murders (1991). I know, I know. You're stunned with surprise. 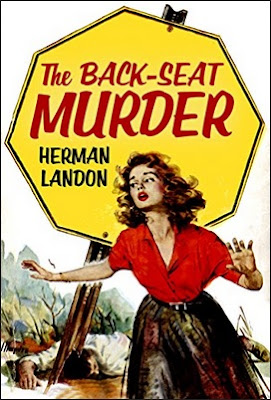 The two impossible crime novels listed in Locked Room Murders are the plainly-titled Mystery Mansion (1928) and the more intriguing-sounding Three Brass Elephants (1930), alternatively published as Whispering Shadows, which concerns the disappearance of "a red-and-black room that had contained a body." I haven't tracked down either of these titles yet, but I did stumble across another one of Landon's locked room mysteries. One that was entirely overlooked by Adey!

The Back-Seat Murder (1931) immediately plunges the reader in the middle of a dark, murky and ominous plot that begins in the cellar of Peekacre. The country home of a well-to-do businessman, Christopher Marsh.

Leonard Harrington is the private secretary of Christopher Marsh and, "a little after two o'clock in the morning," is raking an ash pile in the cellar, but he's caught in the act by the live-in nurse of Mrs. Marsh, Theresa Lanyard – who asks him a startling question. She asks him if he thinks the cellar is "the place where David Mooreland was murdered." Seven months before, Mooreland disappeared before he could "lay certain unpleasant facts before the authorities" that would probably have resulted in a lengthy prison term for Marsh. Mooreland had visited Peekacre on the day of his disappearance, but the house was searched and not a trace was found.

So the pseudo-private secretary believes Marsh has destroyed the body to the best of his ability, but had "failed to realize that even in a raging fire a body can't be completely obliterated." Harrington has found a gold tooth in the ash pile that already been identified. Who are Harrington and Lanyard? What links them to the missing and presumably dead Mooreland?

All these questions remain unanswered, for the time being, but they decide to work together to prove Marsh has murdered Mooreland to save his own neck. And here the plot begins to thicken considerably.

On the following morning, Marsh dictates a letter addressed to the attorney prosecutor of the county, James C. Whittaker, but the content is unsettling to Harrison. Marsh brazenly accuses the newly-minted partners in crime, Harrington and Lanyard, of plotting his murder and the former is ordered to deliver the incriminating letter, in person, to Whittaker – which is when two utterly impossible situations follow each other in short succession. The first impossibility occurs when Harrington has been driving for forty-five minutes and glances in the rear-view mirror to see "the course, crafty and malevolent countenance of Christopher Marsh" in the back-seat.

Harrington had been going between thirty-five and forty miles an hour. He was the sole occupant of the car, which is confirmed by the garage owner who changed the car-battery after he left Peekacre, but somehow, Marsh had miraculously appeared in the back-seat of the car! An impossibility very reminiscent of Edward D. Hoch's "The Theft of the Bermuda Penny," collected in The Thefts of Nick Velvet (1978), but in that short story someone disappeared from the back-seat of a car going seventy miles an hour.

Marsh has a gun and tells Harrington to drive to an old, abandoned mountain top hotel, where he plans to dispose of him, but, when they arrive, Marsh is murdered in the back-seat – stabbed in the neck while Harrington was looking him in the eyes! They were the sole occupants of the car. Three of the four doors were locked and the fourth door, unlocked, was on the right side of the driver, but no mere mortal could pull off "a murder in such stealthy fashion" without being seen by Harrington. The windows were closed and there were no footprints in the soggy dirt road surrounding the car. 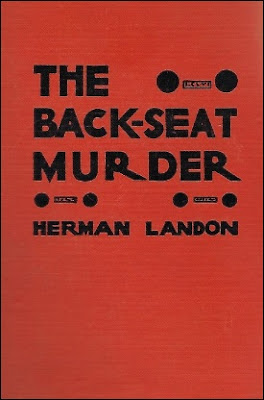 A solid premise with an intriguing, double-barreled impossible situation, but Landon was unquestionably a second-string mystery writer and The Back-Seat Murder reads like a cheap dime novel.

There a number of shady and sinister personalities moving in-and out of the story. Such as the scrawny blackmailer, Samuel B. Tarkin. After Marsh is murdered, Harrinton finds Lanyard in the abandoned hotel with strange man, Harry Stoddard, who calls her "a lying, cheating, two-faced, double-crossing crook." The elderly and obliging Martin Carmody had lent his car and chauffeur to Lanyard on her "mysterious mission" to the hotel. Rounding out the list of suspects is the dangerous, thickset Roscoe Carstairs.

They're all unconvincingly-drawn, paper thin stock-characters who are annoying secretive about their motivations and act only in service of the plot, which makes it appear only the murderer acted semi-logical throughout the story – because this character actually had a reason to act like that. But, on a whole, the characterization is very poor.

However, there's a good, undeveloped pulp-style short impossible crime story buried in The Back-Seat Murder. The attorney prosecutor, Whittaker, acts as the primary detective of the story, but a chunk of the credit for the work has to go to a county policeman, Storm, who has "the right kind of brains for this sort of job." Admittedly, they did a fine job in selling the impossibilities as they go over all the possibilities and this convinced me the solutions were either going to be good or pretty bad. Luckily, they were more good than bad.

The solution to the seemingly impossible appearance of Marsh in the back-seat of a speeding car was something you would expect from a locked room yarn by Hoch. I assumed Marsh had simply emerged from the empty space under the back-seat, but this was a pleasant surprised. The second impossibility, stabbing in a locked car with an innocent eye-witness, is rooted in the traditions of the pulpiest of impossible crimes (c.f. John Russell Fearn's Account Settled, 1949) and certainly is an original, one-of-a-kind trick, but a lack of clues made it hard to swallow. However, Landon made a sporting attempt to produce a fairly clued, last-minute surprise, but one of the chapter-titles in the table of content ruined that party. So avoid it like its Julian Symons.

I don't remember who of you said that a case can be made that good ideas should be taken away from bad writers, but The Back-Seat Murder should be entered as Exhibit A. The impossible situations in the locked car were original and genuinely baffling, which were actually played to good effect, but Landon simply was not good enough to fully deliver on them. So you'll end up with a mixed, poorly written bag of tricks.

Still... I didn't entirely disliked it. Yes, this mainly has to do with the originality of the two impossible crimes. Landon was a second-string (perhaps even third-string) writer of pulp stories and dime novels, but appeared to have contributed some interesting and original titles to the locked room library. So you can expect me to return to Landon at some point in the future, because I'm an unrepentent locked room fanboy.
Geplaatst door TomCat on 7/31/2019