Joan A. Cowdroy was a mainstream novelist from the 1920s, but, towards the end of the decade, she turned to the detective story and introduced, what is, "presumably the first Asian detective" created by a British mystery writer in Mr. Li Moh – an enthusiastic gardener who made his first appearance in Watch Mr. Moh! (1931). A book published in the U.S. under the more alluring title of The Flying Dagger Murders. Very Carter Dickson-like! 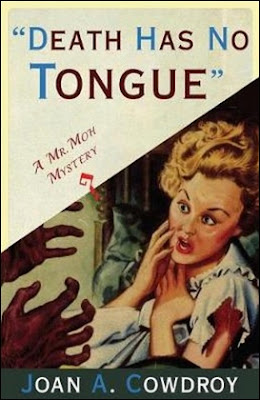 Li Moh appeared in six novels together with Cowdroy's original series-detective, Chief-Inspector Gorham of Scotland Yard, who debuted in The Mystery of Sett (1930) and "performed solo" again in her last mystery novels. Unfortunately, these novels have been out-of-print for eons and hadn't even heard of Cowdroy or Mr. Moh until Dean Street Press decided to exhume them from the literary graveyard of forgotten detective stories.

Early last month, DSP republished two of Cowdroy's Mr. Moh titles, Murder of Lydia (1933) and Death Has No Tongue (1938), which are introduced by genre historian and obvious suspect, Curt Evans. Interestingly, he points out Cowdroy probably "derived her inspiration for Mr. Moh," not from Earl Derr Biggers' Charlie Chan, but "trips to the Far East to visit her brother." A Superintendent of the Rubber Control Office in Singapore. So when he died in 1939, Mr. Moh went along with him.

So with two of these obscure detective novels at my disposal, I decided to go with the more tantalizingly-titled Death Has No Tongue.

Death Has No Tongue takes place among the residents of Pound Lane, Linnet, which used to be "a jolly, old-world sort of village," but, over time, the place got "swamped and suburbanized" – slowly turning the village into an outlying faubourg of London. Mr. Li Moh tends to the garden of a spinster, Miss Hyde, who lives together with her brother and "celebrated author," L.V. Hyde. Lately, someone has been destroying her garden and flower-beds. A lovely almond tree was destroyed. The flowers were "hacked and crushed" and "the torn-up bulbs smashed."

A "cruel, wanton act of destruction" that gravely offended Mr. Moh and turned to his old friend, Chief-Inspector Gorham, to help him collar the vandal. But when they arrive on the scene of the crime, they notice a group of three men standing in the garden of one of the three houses on Pound Lane. What has their attention is the naked body of woman behind the screen of laurels growing beneath the veranda.

The body is that of a local woman, Ellen Shields, who was a simple, very religious woman who cleaned houses in Pound Lane. So why had she been "stripped naked, strangled by hands" and "a man's jacket stuck on her" before being dumped in the garden of a house? A house that belonged to a journalist, Lewis Hardwicke, whose fiance died weeks before the wedding and had been away from the house they were going to live in, but unexpectedly returned moments after the body was discovered. And he's not the only resident of Pound Lane giving Gorham problems by complicating the case.

And then there are the clues. Why did Miss Hyde's dog went missing on the night of the murder and how did it get wounded? Why was the victim's beret found in the garage of her last employers, the Hubberds? What made "a jagged hole" in one side of the beret "where a piece roughly V-shaped" had been torn out? And what had happened to the victim's clothes? 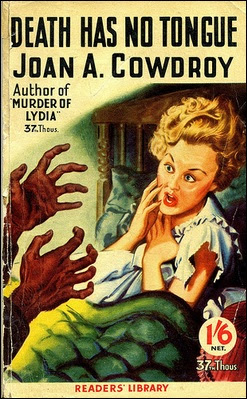 So all of this makes for an intriguing and appetizing premise. However, I have one, but not unimportant, complaint about the investigation.

DSP billed Death Has No Tongue as a "Mr. Moh Mystery," but he's a complete non-entity here and the bulk of detective work is done by Gorham. Mr. Moh has a few appearances to kick-start the plot and throw in some flowery-worded comments or observations, but is mostly absent until the ending and this appears to be par of the course – because Kate, of Cross Examining Crime, observed the same problem in her review of Murder of Lydia. After the titular murder in that book, "Moh is not seen very much." I agree with Kate that a potentially interesting character, like Mr. Moh, should have been "centre stage or at very least as present as Gorham."

This makes me suspect Mr. Moh was not intended as the main series-character, more like a recurring character or understudy to Gorham, but got top-billing from DSP to appeal to a modern audience. Personally, I think it would have been smarter to have billed these two reprints as "A Chief-Inspector Gorham & Mr. Moh Mystery," because they do arrive at the same conclusion. Sadly, Mr. Moh's contribution to the solution and even saving a life is not as impressive, because you never really got to see him at work.

Something that'll inevitably disappoint some readers who'll pick up these books hoping to find Britain's answer to Charlie Chan or Lily Wu.

Nonetheless, the plot of Death Has No Tongue nicely fitted together and picked up enough clues to understand the motive of the murder, which, in turn, revealed the identity of the murderer. An observant reader with a reservoir of fairly useless knowledge should be able to spot an all-important clue, early on in the story, before it's blatantly pointed out later on. So this was definitely one of my triumphs as an armchair detective.

Cowdroy is a good addition to the list of long-forgotten, more literary, female mystery writers DSP has brought back from oblivion such as Elizabeth Gill, Annie Haynes, Winifred Peck and Molly Thynne. So you can expect a review of Murder of Lydia in the hopefully not so distant future, but first I'll be returning to one of my two favorite DSP writers, Christopher Bush and E.R. Punshon!
Geplaatst door TomCat on 4/02/2019

Email ThisBlogThis!Share to TwitterShare to FacebookShare to Pinterest
Toe-Tags: GAD, Joan A. Cowdroy