Dr. Robert McNair Wilson was a Scottish-born physician and surgeon, who was the House Surgeon of Glasgow Western Infirmary, Consulting Physician of the Ministry of Pensions and editor of Oxford Medical Publications, but more importantly, Wilson was the author of twenty-seven mystery novels – published as by "Anthony Wynne." A penname closely associated with the impossible crime sub-genre with twenty-one novels and two short stories listed by Robert Adey in Locked Room Mysteries (1991).

Unfortunately, the lion's share of his work are rare, out-of-print and often very hard-to-get titles. Only two or three of them are relatively easy to get your hands on. 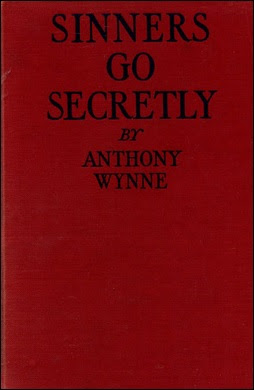 British Library Crime Classics reissued The Silver Scale Mystery (1931) in 2015 under its alternative title, Murder of a Lady, and there appears to be a print-on-demand edition available of The Red Scar (1928). The last item that's not too hard to find is a very well-known, often anthologized short story.

"The Cyprian Bees" originally appeared in the February 6, 1926, issue of Flynn's and was first collected in Wynne's only collection of short stories, entitled Sinners Go Secretly (1927), but has appeared in many anthologies ever since – such as Great Short Stories of Detection, Mystery and Horror (1928), The Omnibus of Crime (1929) and Great Detective Stories About Doctors (1965). Ellery Queen even included the story in their landmark anthology 101 Years' Entertainment: The Great Detective Stories, 1841-1941 (1943).

A hefty tome that happened to be on my shelves and thought a review of Wynne's "The Cyprian Bees" would make for a nice extension of my previous blog-post, which discussed Francis Vivian's bee-themed The Singing Masons (1950).

"The Cyprian Bees" is not one of Wynne's numerous locked room tales, but still has his long-time series-detective, Dr. Eustace Hailey, who's a Harley Street nerve specialist and a dilettante in the detection of the crime. An unofficial consulting detective with a predilection for impossible crimes, bizarre murders and abnormal criminals. This story has not, as said above, a locked room puzzle, but the plot has a bizarre murder and abnormal murderer. Or, at least, the plot the murderer had hatched qualifies as something out of the ordinary.

Inspector Biles, of Scotland Yard, came to Harley Street to consult Dr. Hailey and brought with him "a small wooden box" that had been found by a police constable in a gutter in Piccadilly Circus. There are three live bees in the box of a special breed, the Cyprian, described by experts as "notoriously very ill-natured" and a fourth specimen had been found inside a parked car, in Leicester Square, with a dead woman behind the wheel – who had been "stung by a bee just before her death." So what's the connection between the dead woman, the bees and an apparently harmless bee-sting?

Dr. Hailey right away identifies the death of the woman as "a clear case of anaphylaxis" and explains to Biles how a medically-minded killer, like a physician, could induce a fatal, allergic reaction with doctored inoculations. But he also gets to play psycho-analyst when visiting the victim's apartment and forms "a mental picture" of the dead woman. Or when he gives a pyschological interpretation to a shop receipt for a copy of The Love Songs of Robert Browning.

However, "The Cyprian Bees" is more a story of crime than detection. The murderer only makes an on-stage appearance after being identified by Dr. Hailey, who correctly pegged this character as a doctor and bee-keeper, which did provide the story with harrowing ending when the murderer attempts to execute the second phase of his murderous plan. Only to be foiled by the quick-acting Dr. Hailey.

I think Wynne wrote "The Cyprian Bees" with Conan Doyle in mind, because certain plot elements are somewhat reminiscent of such stories as "The Adventure of the Speckled Band" (The Adventures of Sherlock Holmes, 1892) and "The Adventure of the Devil's Foot" (His Last Bow, 1910). Let's not forgot Holmes retired from detective work to become a bee-keeper.

So not the all-time classic I hoped from a frequently anthologized story, but not too bad for a throwback, or homage, to such Sherlock Holmes stories as "The Speckled Band." The only genuine problem here, one commonly found in Wynne's detective-fiction, is that the medical or psychological aspects can be a bit dated or inaccurate, but even that's in keeping with such stories as "The Speckled Band." My advice is to read this story as a homage to Doyle and Holmes.
Geplaatst door TomCat on 9/29/2018