"I never deny the possibilities of any new scientific discovery. The X-rays, and the transmutation of elements were incredible enough when they first came to light, though they're commonplaces today."
- Magnum (Max Rittenberg's "The Mystery of the Vanishing Gold," collected in The Invisible Bullet and Other Strange Cases of Magnum, Scientific Consultant, 2016)

Over the past couple of months, I had a pretty good run when it came to disinterring some excellent, long-lost, detective novels, captivating reads and a few rewarding oddities. Even the poorer titles tended to be readable yarns. You've to go back to early October for the last monumental dud that passed through my hands, but nothing truly bad, or crushingly disappointing, had come my way since then – until now. And this disappointment came at the hands of my favorite second-stringer, John Russell Fearn. Oh, the betrayal! 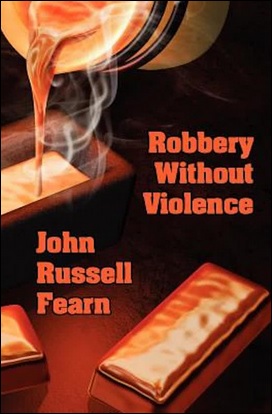 Fearn's Robbery Without Violence (1957) is a novella, originally published in the December 14, 1957, issue of the Toronto Star Weekly and the 2012 reprint edition has a short story, titled "Death at the Observatory," tacked on at the end. The short story was first published in Modern Wonder, in 1938, which was later expanded by Fearn into a full-length science-fiction mystery, The Lonely Astronomer (1954), but more on that later.

Robbery Without Violence begins promising enough with the arrival of "no less than £50,000,000 worth of yellow metal," in one consignment, at Mackingley's Bank. A lump-sum of gold representing practically "the entire wealth of a certain small foreign state" and it "produced headaches in all directions."

The gold is stacked ceiling-high in an empty "strong vault" with an impregnable, time-locked door, set to open once every twenty-four hours, which is when the head cashier, Clive Burton, inspects the gold. After which the door is time-locked for another twenty-four hour period. Only two men knew the combination of the time-lock, Burton and Joseph Mackingley, who is the managing director of the bank. Finally, the impenetrable strong room is located in the basement of the guarded bank building and the entrance is surveillanced by an early 1950s version of closed-circuit TV cameras.

As to be expected from a prolific science-fiction writer, Fearn was well aware of this developing technology in the 1950s and used it accordingly. On a historical side-note, CCTV is one of the technological inheritances of World War II and the first time it was used was in Germany, 1942, to monitor the launch of V-2 rockets.

Anyway, the gold is as safe from thieves as if it been stored on the surface of the moon, but, when the vault door is opened again, Burton is greeted by blank, steel-enforced walls. The strong room had been emptied out! Every single brick of gold had vanished into thin air! Chief Inspector Hargraves of Scotland Yard is completely flummoxed and he decided to call in an expert specialized in these seemingly impossible conundrums.
Sawley Garson is "an ex-government scientist" and "something of a nut," who also appears in the posthumously published The Man Who Was Not (2005), but he's basically a blander and flatter incarnation of a similar series-character, Dr. Hiram Carruthers – whose recorded cases include Vision Sinister (1954) and The Silvered Cage (1955). Garson immediately notices the importance of the watchman's radio, which could not be listened on the night of the theft on account of an (electrical) interference. However, this is also the point where the wheels are starting to come off the story.

I should have expected what was coming, because the plot had been described as having "a distinctly science fictional flavour," but assumed the locked room theft would turn out to be along the lines of the scientific impossibilities as imagined by Max Rittenberg, Vincent Cornier and Arthur Porges. Fearn himself wrote a number of mysteries that belong in that scientific category, but this was, indeed, purely science fictional. And a complete and utter cheat in this normal, everyday setting.

The science-fiction trick also struck me as lazy hackwork. I'm not an expert when it comes to science-fiction tropes, but I would not be surprised if science-fiction readers look upon this aspect of the plot in the same way as I look at detective stories with secret passages, unknown poisons or surprise twins.

Fearn might as well have said that the universe burped inside that sealed vault and all of the gold had slipped into a black hole or something. It would have been more original than what we got.

What definitively sank the story is the unpardonable crime of being as dull and boring as an essay on gravel extraction. Once the plot begins to edge towards science-fiction territory, there was nothing left to hold my interest. The impossibility was being explained away by the magic of science-fiction science and the brains behind the theft was obvious from the start. Embarrassingly, this character morphs into a bad comic book-style villain ("I can—and will—give you the earth in time") with a super weapon that could very well have placed the world in the palm of his hand.

So I was glad this was only a novella, because I probably would have been able to finish it had it been a full-length novel. And arriving at that final page felt like a merciful shot of Novocaine to my brain. Sweet release at last! So, no, I did not enjoy reading Robbery Without Violence and regret I picked this one over Within That Room (1946), which is one of Fearn's legitimate locked room mystery novellas. Oh, well. Maybe next time.

Finally, there's the short story, "Death at the Observatory," which is actually closer to the scientific (locked room) mysteries by the previously mentioned Rittenberg, Cornier and Porges, but the explanation still flirts heavily with the science-fiction genre. However, it is actually an original explanation.

The story takes place at the new Richmond Observatory where the chief of the astronomical staff, Dr. James Crayson, is found "sprawled below the platform of the mighty new 400-inch reflector" with a fatal head wound. Dr. Crayson's assistant, Charles Bradmore, stands over him with a metal bar in his hands and is subsequently arrested, but claims to be absolutely innocent of any wrong doing. Only person who takes his word for it is his best friend, Dick Warland, who consults a well-known scientist, named Scott Marlo, with "an enviable reputation for solving mysteries through scientific deductions." By the way, Marlo is cast from the exactly same mold as Dr. Carruthers and Garson.

Warland is convinced that "nothing but a scientific cause could have killed Crayson" and Marlo has a pretty good idea where to find the source of this scientific cause, but I had already read The Lonely Astronomer. So the explanation hardly came as a surprise. However, it was a nice attempt at combining the formal detective story with a science-fiction plot and its sole weakness is the lack of fair play. I don't think you can really arrive at the same conclusion as Marlo, but regardless, it was a nice little yarn that somewhat (but not much) made up for its predecessor.

All things considered, Robbery Without Violence was an uncharacteristically poor work by Fearn. Even by the standards of a pulpy second-stringer and genuinely wished there were some redeemable qualities about the story. But after the intriguing opening, the story and plot simply falls flat. And don't forget the disappointment.

On the bright side, I received a certain impossible crime novel in the mail recently and that one will be next on the hit-list. So, once again, don't you dare touch that dial!
Geplaatst door TomCat on 11/26/2017