"Blackmail is the most dastardly of crimes."
- Mrs. Bradley (Gladys Mitchell's The Echoing Stranger, 1952)

Margaret Lane van Patten was an American mystery novelist from Portland, Oregon, who moved to London, England, after her marriage to Frederick van Pattan in 1913 and used her adopted homeland as a backdrop for thirteen detective novels – eight of them reportedly star her cast of series-detectives. You read that correctly. She wrote a score of mystery novels, under the name of "Gret Lane," about a cadre of (semi) amateur detectives.

Kate Marsh is the protagonist of the series and the de facto ringleader of the group, who rubs her nose whenever she gets a hunch, which tells her mystery writing husband, Tony, that another body is waiting for them just around the corner. She has pair of partners-in-crime in John Barrin (late of Scotland Yard) and his homely wife, Jennie. This group is rounded out by their Chinese friend, Min Ling, who runs an antique store and Tony's foul-mouthed parrot, Blaster Murphy, who had "sailed the seas on tramps and whalers" and acquired a sailor's vocabulary – scandalizing people unaware of the bird's seafaring vernacular with a torrent of "explicit adjectives." I'm not going to the lie to you, the parrot was my favorite of the gang. 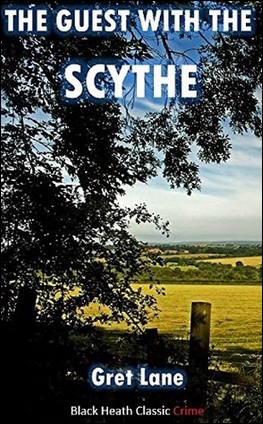 This eclectic group of detectives made their first appearance in The Curlew Coombe Mystery (1930) and would go on to appear in seven additional novels, such as The Lantern House Affair (1931), Death Visits the Summer-House (1939) and Death in Mermaid Lane (1940), but I decided to go with the last one in the series.

The Guest with the Scythe (1943) was not the only the last book about Kate Marsh and her close-knit group of friends, but also the final book Lane wrote during her lifetime as she passed away the following year. My reason for selecting this particular title was the backdrop of a residential spa, in rural England, which became a shelter for people who fled their towns and cities during the Blitz. And the war has a noticeable influence on the characters and events within this story.

White Owl Cove is the home-base of the series and the opening chapter tells how the war has affected that tiny village on the Devon coast.

All "the able-bodied men went to sea" and "the young women flocked daily to a near-by munition factory." The elderly people took care of the children and the children did their part by knotting nets for the purpose of camouflage. Barbed-wire, concealed gun emplacements and soldiers appeared on the shore and cliffs. Kate and Tony Marsh had handed over their semi-detached cottage to "six old ladies who had been blitzed from their Home for Needy Gentlewomen" and had temporarily moved in with their good friends, Mr. and Mrs. John Barrin – who live right next door. Tony had also gone to sea on a Plymouth minesweeper, but was invalided out of the army with a badly injured shoulder.

So this was an interesting snapshot of the effect the war has on a small, coastal community, but the story moves away from White Owl Cove after the first chapter. And the reason for the change in scenery is an unexpected visit from Inspector Smith, of Westbridge, who tells them they can stay at the small, but first-rate, guest house owned by his sister, Mrs. Carter. There is, however, a catch to this generous invitation.

Publicly, they'll be staying at the residential spa to get treatment for Tony's shoulder, but the reason why Mrs. Carter really wants them there is to bait a trap for a blackmailer. A ruthless specimen who drove one of her guests to take his own life. The victim was a young man, named Benson, who was terrified at the prospect of having to serve in the army and when papers were stolen from his room he went out to a field and shot himself. He was brought back in dying condition and confessed to Mrs. Carter that there was "a clever, wicked blackmailer" among her guests.

On a side note, the content of the blackmail material was never elaborated upon, but modern readers can make an educated guess based on the character description of Benson, which was of a "very handsome," effeminate young man "on whom blackmailers batten" – hinting at a personal preference that was not done at the time. Tragically, the public revelation of this secret would have probably kept him out of the army and away from the battle field. Anyway...

So the entire gang descends upon the guest-house of Waterside, in Wellwich, where they're confronted with a large, sprawling cast of potential suspects. There are, all together, sixteen guests and with all the side-and series characters you're looking at a playing field with roughly twenty-five pieces on it. What they find within this large, but closed, circle of people is more than just a blackmailer.

One of the guests they originally pegged as the blackmailer turned out to be merely "a curious busybody," who, like Don Quixote, "tilts at the windmills of rudeness in defense of civility," which he demonstrated when he employed, what could be construed as, blackmail material to publicly reprimand a pair of snobs, Mr. and Mrs. Wilson. But they also come across a potentially amorous prowler, literal kissing cousins, an invalid, two elderly, devoted twins and an old-fashioned opium-addict. Oh, they also find the murdered remains of one of their fellow guests! 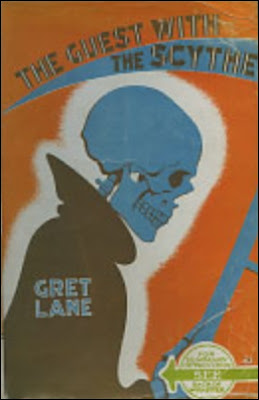 Back home, Tony had prophesied that they would "bag a brace of corpses," because they "always do." He was right on the money.

One night, Kate and Tony were awakened by their dog, Taffy, who heard something outside the french windows and what they found was the body of one of their fellow guests, Mrs. Lee, laying underneath her bedroom window – twisted, bloodied and evidently very murdered. Interestingly, what immediately eliminated the possibility of an accident or suicide were not the various head wounds, but the fact that the murderer had replaced the blackout curtain after Mrs. Lee was thrown out of the window. It's one of those little historical details I always love to find in detective stories from this period and here it has some relevance on the plot.

The second, brutally murdered victim is found when the opium-angle leads our group of detectives to the rooms of a fortune-teller, Ismar the Palmist, where they chance upon a dead man in the waiting room with an ominous worded note pinned to it, which is "a warning to the curious" and ended with "busybody, beware." Obviously, this note was meant as a hint to Kate to keep both her nose and her friends out of the murderer's business. A hint stubbornly ignored by Kate and this makes the murderer want to spray death "like a machine-gun" (i.e. mass murder) at the resort.

The Guest with the Scythe is a pleasantly written, engaging and occasionally amusing mystery, but as a story of detection and ratiocination the book is not all that impressive. One of these shortcomings is the thread-bare, almost non-existent, clueing. Kate stumbled to the truth when the murderer made a slip of the tongue, but this happened in the final twenty, or so, pages of the book. A second, very minor, clue was never shared with the reader. But the worst thing is that these scraps only gave her an idea who had committed the murder. She had to wait for a written confession by the murderer to fill in the gaps.

So the conclusion to the story leaves me in two places. On the one hand, I can't say this was an unpleasant or badly written book, but the overall plot turned out to be very poor indeed. I suppose this is one of those series you have to read for the characters rather than the plot (like the Lockridges).

However, the book was written shortly before Lane's passing and the whole dying process may have negatively impacted the quality of the plot. I'll probably try one of the earlier ones, such as The Lantern House Affair, before making up my mind about this series. Something that has become very easy, because Black Heath Editions reissued nearly all of Lane's work. So I'll come back to Lane, Kate Marsh and the gang sometime in the future for a second opinion.

Finally, allow me to draw your attention to my previous review, which is very long rundown of all the short stories in a 430-page anthology, The Realm of the Impossible (2017), that gathered more than twenty impossible crime stories from all over the world.
Geplaatst door TomCat on 10/19/2017