"But in any case, after another crime, we shall know infinitely more. Crime is terribly revealing. Try and vary your methods as you will, your tastes, your habits, your attitude of mind, and your soul is revealed by your actions."
- Hercule Poirot (Agatha Christie's The ABC Murders, 1936)

Thus far, 2016 has been a reasonably solid year for reading and discovering detective fiction. There were a handful of mystery novels that were uneven in quality, sparsely clued or stumbled in the final chapter, but none of them deserves to be qualified as a complete train wreck – unlike my worst read from last year.

So I was glad that my return to the works of Rex Stout not only continued this positive trend, but also uncovered one of the best stories from the Nero Wolfe and Archie Goodwin series.

As I've stated in the past, the Nero Wolfe corpus is one of the rare exceptions in which I prefer characters to plot and there's a good excuse to justify such heresy. Stout had an uncanny knack for writing dialogue that gave his cast of regular characters a breath of life and endowed them with a mind of their own, but even more importantly, they're characters you would love to sit down with in real-life – in spite of their personal flaws. Who would not love to share a dinner table with Wolfe or have a front row seat for one of the many head-on collisions between him and the cigar-mangling Inspector Cramer? Or have a verbal exchange with the witty, sharp-tongued Archie or simply a guided tour of the brownstone with its rooftop greenhouse and the kitchen where their live-in chef, Fritz, prepares five-star meals.

Nevertheless, the fact that Stout's talent manifested itself mainly in writing great lines for characters, who are both larger-than-life and yet very human, does not mean he was hopelessly lost when entering the plotting department. Some of my favorite entries in this series came with the added bonus of a soundly constructed plot: Too Many Cooks (1938), Some Buried Caesar (1939), Not Quite Dead Enough (1944) and And Be a Villain (1948). You can now expand that list with the wonderful Plot It Yourself (1959).

First of all, it should be pointed out that Rex Stout served as president of both the Authors Guild and the Mystery Writers of America, which is probably where he found the ideas and inspiration for Plot It Yourself – which has a clever and fairly original plot. Stout even found a new interpretation for the term "copycat killer," but the most ingenious part of the plot is the plagiarism racket that swindled a small group of authors and publishers out of large chunk of pocket money.

The case begins when a small contingent of people visits the office of Wolfe and Goodwin: Philip Harvey (author), Mortimer Oshin (playwright), Amy Wynn (author), Thomas Dexter (publisher), Reuben Imhoff (publisher) and Gerald Knapp (publisher). They form a Joint Committee on Plagiarism, selected from the ranks of the Book Publishers of America (BPA) and the National Association of Authors and Dramatists (NAAD), who are tasked with looking into a series of accusation of plagiarism that begin to follow a suspicious pattern – there "have been five major charges of plagiarism" so far. All of them seem to follow a similar script.

A book is ascending the bestseller list or a play begins to garner success when a letter arrives, in which the writer claims the plot, characters or even the dialogue were cribbed from a submitted, but unpublished, manuscript – a manuscript nobody remembers ever having seen or read. However, the manuscripts are found in drawers of the authors and archives of the publishers, which forced them to settle for tens of thousands of dollars.

Obviously, they were fake and planted on the victims, but there's a gaping ravine between a feeling of certainty and proof that will stand up in court. So the committee decided to hire the services of the best detectives money could get them and it's problem right up Wolfe’s alley. 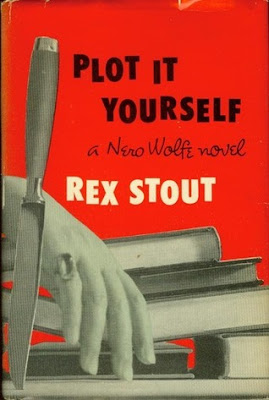 Wolfe really hates to do any actual work (i.e. physical action), but he has to rent his remarkable brain in order to indulge in his expensive pastimes: growing orchids and lavish meals, which require the services of a resident orchid nurse and a live-in chef. Not as costly are his well-stocked bookshelves. Wolfe is an avid reader and Archie guesses he reads "two hundred or so books" a year. So it's not entirely surprising to find Wolfe doing some actual detective work in the initial stages of the investigation, instead of parking his one-seventh of a ton in his "oversized made-to-order chair" and synthesize the information brought to him by Archie, which he simply does by reading the fraudulent manuscripts. Hey, it was still work for Wolfe!

There were four different claimants, Alice Porter, Simon Jacobs, Jane Ogilvy and Kenneth Rennert, but Wolfe astutely deduces all of their manuscripts that their claims were based on were written by one and the same person – based on "the internal evidence" of diction, syntax and paragraphing. As Wolfe states, "a clever man might successfully disguise every element of his style," but there’s one exception, namely paragraphing, which comes from "the depths of personality."

However, the discovery of a common link between the claimants requires an extensive, all-encompassing and costly "kind of investigation," which falls outside of Wolfe's expertise. Regardless, he offers his clients a short-cut solution for their problem by offering one of the claimants a chunk of money and exemption from legal repercussions in exchange for a name. The name of the person who wrote those manuscript and basically the brains behind the whole scheme, but this person is well-aware of what is being planned and begins to remove all of the loose ends.

Archie is send around to the home of one of the claimants, Simon Jacobs, but is greeted ("not you") by Sgt. Purley Stebbins of Homicide West. Jacobs' body was found that afternoon behind a bush in Van Cortlandt Park, "dragged across the grass from the edge," which means he probably taken there from a car and the cause of death was a stab wound in chest – he would not be the last person to go out of this world with a knife buried in his chest. The body's pile-up in the final half of the book and Wolfe realizes he gave away too much information to the swindler-turned-murderer. It makes him roar "in a language that was probably the one he had used as a boy in Montenegro," but Wolfe redeems himself by trapping a strong-minded, very determined witness in giving away the identity of the murderer in order to wrap up the case to the satisfactory of his clients. And to earn his fee.

My favorite part of Plot It Yourself is the first half, which deals with the fraudulent accusations of plagiarism, because it's cleverly done and challenges Sherlock Holmes' assertion that "it has all been done before" and "there's nothing new under sun." But how it turned into a murder case and the identity of the murderer was also very nicely done. Considering the book was published in the final months of 1959, it's almost as if the book represented that final glance over the shoulder before the door closed on that Golden period in the genre's history.

So, all in all, Plot It Yourself has all the familiar faces and elements that made readers return to that notorious brownstone, on West 35th Street, for many decades and several generations, but the excellent and original plot also makes the book one of those brightly glowing embers in the hearth were once the mighty fire of the Golden Age roared.

Simply put: I very much enjoyed Plot It Yourself.
Geplaatst door TomCat on 3/19/2016