It Takes Your Breath Away

"The situation is becoming an impossible one."
- Professor Moriarty ("The Final Problem," collected in The Memoirs of Sherlock Holmes, 1894)

The name of Richard Forrest has been hovering in my peripheral vision for years as a writer who participated in that beloved sub-category of the detective genre, locked room mysteries and impossible crimes, but seem to have been unsuccessful in securing ever-lasting fame in this niche corner. Paul Halter's locked room novels appear to have been more well known, before they were even being translated, than the Lyon and Bea Wentworth mysteries by Richard Forrest, but is that justified? After all, Herbert Resnicow's reputation as a locked room specialist stills lays in shameful neglect. 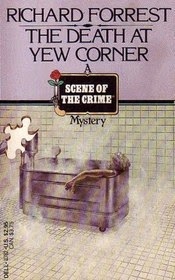 The Death at Yew Corner (1981) is the fifth in the series of books starring Lyon, author of novels for children, and his wife Bea, a former senator, to whom murder and crime are pass times forced upon them by circumstances. In their fifth outing, circumstances that'll be leading them to murder are whirling around The Murphysville Convalescent Home, situated in rural Connecticut, where rivaling interests of union groups resulted in a full-blown strike and perhaps a very preventable death – a consequence of the understaffing of the home.

Fabian "Faby" Bunting is an old curmudgeon with a long-standing friendship with Bea, who was going to the home to meet her and suspects there's more to Bunting's death than simply a nurse leaving her unattended in the hot tub. The reader has been privy of the moment the unknown murderer snatched Bunting away and why she had to be killed: she saw too much through her opera glasses when peering out of the window in the sun-room. What she saw was the kidnapping of a labor organizer, Marty Rustman, which are the beginning of a strew of bizarre murders that would not look out of place in the Midsomer Murders. One of the victims is buried under several tons of earth and rocks with a stolen dirt truck, which, I think, actually happened more than once in Midsomer.

Before I continue, I have to point out The Death at Yew Corner isn't as heavy on politics as you might assume thus far. There are some comments, here and there, about minimum wages and Bea longing to reclaim "her" old seat in the senate, but it's mainly decoration – idem ditto for the strike outside of the home. The only (real) politics are the shenanigans of the divided union members, who impressed me as 1920s-style mobsters with a permit. You're apparently lucky if you get slapped across the face with brass knuckles, but Marty Rustman was shot and dumped in a shallow grave. And for this part of the plot, I suspect Forrest (rightfully) thought he could improve on Clayton Rawson's abysmal No Coffin for the Corpse (1942). I think the "dead-man-rising"-gambit was the best handled aspect of the plot and an infinitely better played out than by Rawson, a professional magician, but I think Forrest missed out on a better killer with a good, double-edged motive.

Oh, and I'm absolutely, one-hundred percent sure this part was inspired by Rawson's locked room novel, because Forrest worked an attempted murder in the plot by locking someone up in a sealed coffin – which is the exact opposite of a corpse without a coffin. That makes sense, right?

Speaking of locked rooms: there's one tucked away in the final portion of the story and the scene is set by none other than the prospective victim, who raised the security around her own home as a preventive measure. There are even guards and a dog. However, they couldn't prevent the murderer from getting to their client and they had to take the door apart with a hammer and chisel, but the solution reveals a patchwork of shopworn tricks strung together. But, still, it somehow works in combination with the secured premise, because it explains why someone would go through all that trouble in order to get to the victim – even if it reveals that there’s nothing new or inventive to it.

That basically sums up The Death at Yew Corner: a light, passable and sometimes entertaining detective novel, but not a must-read for aficionados of Golden Age-styled mysteries or impossible crime stories. Did Forrest wrote any locked room mysteries of note? I'd like to know.