"Grifting is the aristocracy of crime."
- Albert Stroller (Hustle)


Back in August of 2011, I was already a fan of the BBC series Hustle when I learned that there was an American counterpart (of sorts) to the series, entitled Leverage, which followed the same basic format – except that everything was done bigger and faster.


Leverage, for those unfamiliar with the series, follows the exploits of a group of criminals, each a specialist in their own particular field (grifting, hacking, retrieval, etc.), who turned on the lowest of their own kind to provide leverage to their victims. I noticed in the previous post that I made on this series that my main objective, when comparing it to their overseas colleagues, was the lazy plotting – when they're faced with a hurdle, Hardison strokes his keyboard and problem solved! This was hardly a problem in the third season. They were even working long cons in a more traditional way.

The Jailhouse Job has the brains of the outfit, Nathan Ford, locked up in a privately owned, maximum secured prison that functions as a cover for a money making scheme and they've decide to take down the corrupt warden as they pull Ford from prison. Hacking into the facility won't cut it and we even get to see them map out the prison the old-fashioned way. As a classicist, I could not but recall The Thinking Machine's prison caper in Jacques Futrelle's "The Problem of Cell 13" (1905). You can put a great mind behind bars, but that won't always lull them into inactivity. 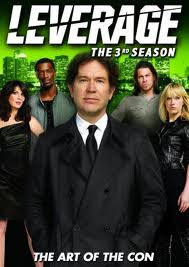 In The Reunion Job, they work what is perhaps a bit of an overly ingenious and emotionally deep con to pry loose a password from a powerful software mogul, but in order to do so, they have to "hack" and "take over" his personality. The Inside Job puts Parker in a tough spot when she botches a solo job and is trapped inside a building with an intelligent security system. They have to con their way in to get Parker out, before the system finds her. The Boost Job and The Ho-Ho-Ho Job featured a high-tech gizmo that briefly brought back that one annoyance from the first season. That said, it was interestingly used in The Boost Job, but too SciFi for my taste.

My favorite episodes of the third season were definitely The Three-Card Monte Job and The Rashomon Job, in which the teams' adversaries are respectively Nate's father, Jimmy Ford, and themselves!

Jimmy Ford is an old-school crook, who did time for one of the families as a favor and wants to get back in the game as a fixer for the big guys. There's just one problem: his son is sitting on his spot and one of them has to go. Nate not only has to go up against the man from whom he got his intellect, but also a hardened criminal who got experience on his side. It's episodes like these that show that the otherwise playful characters have their darker sides and their fair share of emotional baggage. The Inside Job did the same with Parker, perhaps the most popular character of show, reminding the reader that her funny quirks and anti-social behavior have a serious origin. But we also have comedic capers, like The Rashomon Job, in which the team are sharing memories of past jobs and discover that they all tried to steal the same artifact on the same night – five years before they officially met in The Nigerian Job. Their vague memories of that night and their perception of each other, especially Sophie's fake accent (Elliot's version was hilarious), were often very funny.

I thought these episodes were better than the final two-parter, The Big-Bang Job and The San Lorenzo Job, which began at the end of The Jailhouse Job when they were blackmailed by an Italian woman in taking down Damien Moreau, an untouchable crime lord, and most of the jobs they took in this third season was in order to get closer to Moreau (have the writers been reading Detective Conan?). They were not episodes, but the combination of a mob boss and a rogue president of small country didn't felt like the threat it should've been. Like Sterling was in the first two seasons.

That being said, it was a pretty solid season with overall better stories, character development that added to the stories instead of intruding on them and recurring characters (like Agent McSweeten and a rival hacker) that gave the series that real world feel – which is one of the things I love about Detective Conan and the Wolfe Corpus.

I noticed something of interest: In the third episode, The Inside Job, Richard Chamberlain plays Archie Leach, a legendary thief, which happens to be a very similar role he played in a third season (and also the third) episode of Hustle. A mere coincidence or a cleverly hidden nod to that crew on the other side of the pond? Pity that they'll never meet, now that both series are taken off the air. Ah, the road not taken.

Well, I still have two seasons left to go, but first, I have to get back on track with these regular reviews.
Geplaatst door TomCat on 12/28/2012