When We Dead Awaken 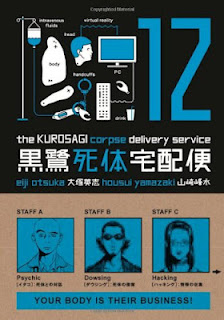 The disadvantages of maintaining a bustling blog dedicated to fostering an environment in which a Silver Age of Detection can blossom have been few and far between, but one that has been bugging me, as a direct result of becoming a blogger, is that the detective story has usurped every inch of my reading list. I have been longing to return to Eoin Colfer's Artemis Fowl-series for over a year now. So I decided to make this place prone for occasional side distractions and took a dib in the few, unread, manga books stacked up on my to-be-read pile and came up with the 12th volume of The Kurosagi Corpse Delivery Service – a sort of humanistic horror series covered with dark touches of humor and touching stories.

As pointed out previously, I'm not a devoted or active participant in the anime and manga community, however, I do consider myself as a casual fan who picked up one or two series after immersing myself in Detective Conan and have come to admire the gift of Japanese story telling – especially when they tell it through a visual medium like a comic book. Whether it's about an ancient board game or a bored Shinigami, if they are from the hand one of their top-notch writers, they are almost impossible to put down or turn-off. Readers of this blog might want to consider giving the animated series Death Note a try. It's a supernatural thriller bound to rules in the spirit of Asimov’s Three Laws of Robotics and the plot twists and turns like smoke in a curl, in which everyone is constantly plotting and scheming. A very intense and intelligent thriller with a daring and dramatic twist halfway through.

The Kurosagi Corpse Delivery Service is a company specialized in locating discarded and forgotten bodies, in order to fulfill their last wish, usually assisting them in taking care of unfinished business, and consists of five graduate students from a Buddhist university – all of whom possess a special gift or talent. Kuro Karatsu is a student Buddhist monk and the psychic of the group who communicates with the corpses they find and can even (temporarily) reanimate them. He also has a spirit, Yaichi, lingering near him. Ao Sasaki is the brain of the outfit, as well as a computer expert/hacker, who takes care of the practical side of business. Makoto Numata is a dowser who can detect dead bodies instead of water and it’s up to him to find clients. Yuji Yata is a bit on the introversive side and wears a grotesque hand puppet, which he uses to the channel the conscience of a bad mannered, wisecracking alien intelligence. Keiko Makino looks like a sweet and innocent girl, but she studied in America to become a fully licensed embalmer and as a result has become somewhat of an outcast in Japanese society. Embalming is seen as an unclean profession over there.

In the earlier volumes, most of the stories were short-short stories, covering a single chapter, but they expanded over the course of the series and now span for several chapters, however, they can still be read as individual stories – making it easy to sample the series before you decide to read on. After all, it's a series with "explicit content" and you have to take that quite literal. The portrayal of corpses in various stages of decomposition, nudity and violence show that Housui Yamazaki has quite a skill with the pencil, but, personally, it never felt that they were just included to gross out the reader or to service its fans (see: fan service). Because gutted bodies and sex isn't this series selling point... it's the wonderful, varied stories and its cast of gargoyles. The best things I remember from the earlier volumes aren't the gruesome depictions of dead bodies, except, perhaps, for the alien, but the stories that were either moving or funny (this series is the first one to poke fun at itself) or even borderline detective stories or full-blown supernatural thrillers. The second volume is basically a novel-length story in which the Kurosagi-crew uncovers a cruel exploitation of the dead.

The 12th volume of The Kurosagi Corpse Delivery Service begins where it all began: Jukaiyama. It's an immense forest and a popular haunt of the lost souls of society to watch the sun rise or set one last time before taking their own lives – because business, as usual, was not booming and they need a client. Unfortunately, Numata’s pendulum only turns up a napping woman, Yuka Suzuki, who's attached to a credit agency and looking for an ex-debtor. Mr. Kawai paid his debts and moved to Jakaiyama Village, a secret settlement somewhere in the woods where people who have grown tired of life and contemplated suicide find sanctuary, except that he’s still around and the crew even speaks with him, but Suzuki insists that he’s an imposter! It's a twisty and gloomy story that brutally molests satirized a part of 21st century life and ends on a note as wonderfully cynical as MacKinlay Kantor's "The Strange Case of Steinkelwintz."

My favorite story from this volume is the second one and puts the spotlight on two young people: Nene and Shakuya. Nene is a nightclub hostess who can separate her spirit from her body at will and uses this nifty trick to lure in customers. One evening, while gazing at the city lights, her eyes fall on Shakuya, an aspiring actor/comedian who lives in houses, where the previous tenants were murdered or committed suicide, for a living (so the landlord can present a clean record of the previous tenant to the next one), and decides to beckon him in. A bond is a swiftly forged between the two as it cruelly broken when Shakuya is murdered in the apartment they had just moved into. The Kurosagi-crew are basically there to mend two souls torn asunder and the resolution had a nice decorative touch of lampshade hanging.

In the last story, the guys find an old man pushing a wheelchair along the river with a life-size doll of a woman in it. The doll is a replica of what his sister might have looked like if she hadn't died as a child during the great air raid on Tokyo. The man is also involved with a gang of foreign agents, who kidnap them, and the spirit of his dead sister, through the doll, asks the Kurosagi-crew for help and the solution involves a dictator, more dolls and guardian spirit. The story also briefly looks at Yata's past again, who was the sole survivor when his parents tried to take their kids with them in a suicide pact, but I have no idea if this was brought up because there are parallels between his and the old man's story or to suggest that his hand puppet might have a different origin.

All in all, an excellent collection of stories that were well worth the wait, but I hope the next release will be within a 12-month period. Anyway, I hope this was not too much of intrusion and a regular review will be up as soon as possible.
Geplaatst door TomCat on 8/05/2012