"Every real story is a never ending story."
- Michael Ende.

San Sebastiano is a speck of a principality, situated in the Riviera, that was dreamed up by James Powell in order to unfetter his imagination from the chains of historical accuracy and was fascinated to watch how an imaginary princedom became the most well-rounded character in A Pocketful of Noses: Stories of One Ganelon or Another (2009) – a collection of short stories culled from the pages of the Ellery Queen Mystery Magazine by that indispensable publisher Crippen and Landru. 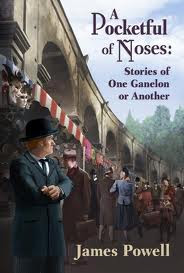 The principal characters of this collection are four generations of Ambrose Ganelon's, whose ancestral tree is adorned with deerstalkers, fedoras and tools of the detective's trade, scourging the criminals patronizing San Sebastiano. This includes members of Dr. Ludwig Fong's Eurasian crime dynasty, who play the Professor Moriarty to their Sherlock Holmes. Ganelon's multiple casebooks are filled with wonderfully told and imaginative tales of crime and deception, loaded with historical details of San Sebastiano, but they seldom, if ever, adhere to fair play rules. They're more in the tradition of late 19th/early 20th Century thrillers, in which master criminals attempt to overthrow a small country or blow-up the crowned heads of Europe.

Nevertheless, this was not the let down that it should have been and it speaks volumes of Powell's ability as a writer to not make me want to care about plot – even if the locked room mystery got a similar treatment. Good fiction is good fiction, plain and simple, but how I was going to review these stories left me in a tangle. So I decided to just discuss the four detectives and their cases instead of each individual story.

The first Ganelon to done the deerstalker and dabble into detection was Ambrose Ganelon I, who reasoned, for the most part, from an armchair and was basically the Sherlock Holmes of San Sebastiano – later known as the Founder of the Ganelon Detective Agency. "The Haunted Bookcase" is my personal favorite, in which a dream of a ghost has a direct bearing on the books he left behind and those same books are being moved around in a locked room. IIRC, this story bears some remarkable resemblances to Norizuki Rintaro's "The Green Door is Dangerous." Other stories included in this section are "The Flower Diet" (involving a mystic's claim that he can draw his nourishments from the odor of flowers, instead of food and drinks, and nobody has caught him eating), "Unquiet Graves" (a scared stiff and body snatching) and "The Priest Without a Shadow" (in which a doomed priest exorcizes a house where a man was decapitated).

The second Ganelon to turn detective turns to the scientific methods of Dr. John Thorndyke to lead him to the end of a case. In his first big case, he confronts "The Gooseberry Fool," a hired assassin who plagues the European continent each summer and leaves Paris deserted – except for tourists and waiters. "The Verbatim Reply" asks Ganelon II to intercept a wrongly dispatched document and "A Pocketful Noses" shows flashes of Mycroft Holmes, suggesting that he is the Intelligence Services, as he investigates the murder of Serbian subject logging around a half a dozen false noses.

The grandson of the agency's founder is from the Hardboiled School, battle hardened on the killing fields of war, which is also the stage for the first story in this section, "Harps of Gold." Ganelon III also tangled with a female member of the Fong family in "The Zoroaster Grin" and brought light in another dark plot in "At Willow-Walk-Behind," but most interesting is perhaps that these stories show the effect the three generations of Ganelon detectives had on the principality – having almost entirely eradicated crime he had to expand business and turn in a Pinkerton-like agency.

The last of the Ganelon detective's is perhaps the smartest, as well as the unluckiest, of the bunch. His family's success has ruined the detective business and now impoverished is dependant on the soup kitchen for his meals. I think this is an interesting, logical and almost evolutionary progress in the series. San Sebastiano is only a speck on the map and therefore crime could be contained, even eradicated, within its borders and the Ganelon's dove into that pond like a flurry of piranhas, and before long, they had reach the bottom of their food chain – and after only four generations the Grand Detective has disappeared from the Grand Stage of San Sebastiano. Well, not entirely, as Ganelon IV still picks up cases here and there, like the theft of some of the "Coins in the Frascatti Fountain" or the mystery of "The Bird-of-Paradise Man."

I can recommend A Pocketful of Noses: Stories of One Ganelon or Another to fans of Sherlock Holmes and the stories from his creators contemporaries, especially the ones who didn’t take themselves too seriously, and hope to see more of Powell's work collected in the nearby future. But most of all, I hope he compiles a tongue-in-cheek history book of San Sebastiano and the Ganelon Detective Agency. I would love to read a full-account of the Half-Day War and how Ganelon's slyboots thwarted an invading army!

It's possible that the next review posted on here will be of an impossible crime novel written, judging by the book's synopsis, in the same style and spirit as the stories I just reviewed here and the description in Adey's book is very enticing... but I also want to return to the Artemis Fowl series. Choices, choices, choices!
Geplaatst door TomCat on 8/26/2012