Food for Thought: "Dead of Winter" (2007) by Catherine Mambretti

Catherine Mambretti is a former college professor and, among other things, a scholar of 17th century literature and an expert in manuscripts and rare books, but she has also written a number of short detective stories – one of her stories should have been listed in Brian Skupin's Locked Room Murders: Supplement (2019). A historical impossible crime story with Pocahontas as one of the characters and a Native American shaman as the detective. 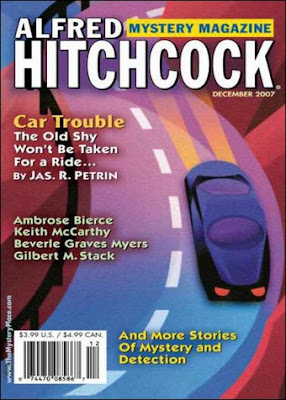 "Dead of Winter" originally appeared in the December, 2007, issue of Alfred Hitchcock Mystery Magazine and learned of its existence through our very own genre-sherpa, Mike Grost, who briefly discussed and praised the story on his website.

The story takes place in Jamestown, Virginia, during the harsh winter of 1609 and is told from the perspective of a 17-year-old white slave, Edward, who had been one of the ship boys that had been sold for corn to the Indians when they landed in 1607 – which was hardly enough to keep the settlers fed. Emperor Powhatan had prepared his people and his storehouses "were packed with bearskins, smoked oysters, char-kee, walnuts, maize" and "other riches." A treasure worth its weight in gold when all the settlers had to eat were "old boots and thrice-boiled horse bones."

Edward had been sent by his shaman master, Araparedhunt ("known as Redhunt to his friends"), to Jamestown to spy at a time when he was sure the settlers had "nothing left to eat except each other," but Edward had been sent back with a message from the commanding officer. Captain Percy had decided to content to marry the Powhatan's daughter, Princess Pocahontas, with "some corn" as a dowry. Pocahontas was already married to a warrior, Kakoum. She has to right to exchange Kokoum for Percy, but Redhunt told Edward to prepare to return to Jamestown with a polite refusal. And then she burst into his yehawkans, asking the Great Shaman to find her husbands murderer.

Kakoum's body had been found in the snow, near the Great Fertile Swamp, with a pierced skull and still clutching his bow. A hundred feet away from the body was a blood-covered boulder, which suggests he might have wounded one of his attackers, but, whoever had attacked him, they left no footprints – as "if they had wings." So rumors begin to swirl around and suspicion falls on the white, starving cutthroats of Jamestown, but Redhunt found an unexpected solution when he closely examined the scene of the crime.

This is where "Dead of Winter" changes from a historical story to a slightly unusual impossible crime story. Particularly for something that was written and published only thirteen years ago.

Firstly, Redhunt is a literary descendant of Arthur W. Upfield's half-aboriginal police detective, Napoleon "Bony" Bonaparte, who are both trackers with an uncanny ability to uncover clues from their natural surrounding – drawing deductions from animals, plants or the unmarked snow around a body. Redhunt uses this method to explain how Kakoum died in that lonely place. Grost pointed out the solution is a variation on a well-known trick, but originally used here to create a no-footprints scenario, which helped give the story an old-world feeling. A solution that firmly places the story in the impossible crime tradition of L.T Meade and Robert Eustace's A Master of Mysteries (1898) and the stories collected in Keikichi Osaka's The Ginza Ghost (2017).

So, purely as an impossible crime story, Mambretti's "Dead of Winter" is a bit of a throwback to some of the earliest locked room mysteries and impossible crime stories, but it worked really well. Combined with the historical set, you have another good story that future locked room anthologists should keep in mind. More importantly, it shows that there's more than enough material out there to justify another supplementary edition of Locked Room Murders. Not that I need another supplementary edition, or anything, but you know, it's handy to have around when you're suffering from a crippling impossible crime addiction. My copies of Adey and Skupin constantly reassure me that my supply of locked room mysteries are still far from being exhausted.
Geplaatst door TomCat on 6/28/2020