Brian Skupin's Locked Room Murders: Supplement (2019) amended Robert Adey's original 1991 revised edition significantly with the inclusion of TV shows, movies, anime and manga, which served as a reminder that I haven't watched a single episode of either Banacek or Kagi no kakatta heya (The Locked Room Murders) – two detective TV-series wholly dedicated to the impossible crime story. A gross oversight that will be corrected before the year draws to a close! But, for now, I have something else that caught my attention. 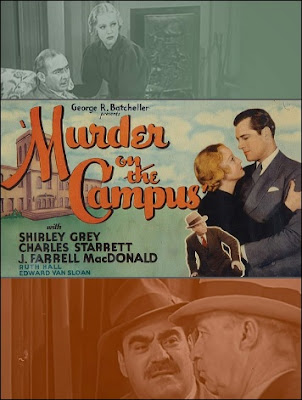 Locked Room Murders: Supplement listed Arthur T. Horman's screenplay of Murder on the Campus (1933), a low-budget adaptation of Whitman Chambers' The Campanile Murders (1933), with two intriguing-sounding locked room situations. Normally, I would prefer to read the book before watching the movie, but The Campanile Murders is a long out-of-print, hard-to-get novel and Murder on the Campus is in the public domain. So...

Murder on the Campus was directed by Richard Thorpe and have seen it being advertised as "a solid collegiate whodunit," but, purely as an impossible crime story, it stands as a good example of how the locked room mystery can help prop up an otherwise threadbare plot.

The two lead-characters of the movie are Bill Bartlett (Charles Starrett), a reporter for the Times Star, who's mad about a college student, Lillian Voyne (Shirley Grey), who's currently working her way through college by singing in a nightclub. Bartlett is even willing to risk "a term in prison" to get her out of trouble when she becomes the prime suspect in a murder case, but, surprisingly, not a murder linked to her sleazy nightclub gig.

A student, Malcolm Jennings, is heard playing the carillon on top of the campus campanile, a bell tower, when the chiming all of the sudden stops and a gunshot is heard. A crowd immediately gathered in front the locked door of the bell tower and, until the police arrived, "not a soul" had come through the only way in, or out, of the bell tower. At the top of the tower, they find a body with a gunshot to the head without any powder burns or a weapon, "a plain case of murder," but where did the shooter go – since he, or she, is nowhere to be found inside the tower! The discovery is followed by scene in which Captain Ed Kyne (J. Farrell MacDonald), Sergeant Charlie Lorrimer (Dewey Robinson) and Bartett rattle of a series of potential solutions to the locked room problem. Such as a rifle shot from an elevated position (high buildings or the far-away hills), hiding places (elevator shaft) or the use of a parachute or rope. All of them are discredited on the spot.

Unfortunately, the discovery and brief discussion of the murder, demonstrating the sheer impossibility of the shooting ("nobody left there after the shot"), is as good as Murder on the Campus gets as a locked room mystery... until the solution.

The solution to the impossible murder is an interesting one. A combination of two distinctly different locked room techniques, closely associated with two different groups of locked room specialists, which is somewhat of a rarity, but the potentially good locked room-trick was completely wasted here – withholding the only "clue" until the last twenty minutes. A late clue so blatant that it was insulting. There's a second, quasi-impossible situation concerning the fatal bullet that had been fired with a gun that had been locked-up at the time of the murder, but this second impossibility is given even less thought than the locked bell tower. Honestly, I probably wouldn't have recognized it as an impossible crime had it not been for its inclusion in Skupin's Locked Room Murders. And it didn't help that the obviously possibility turned out to be the solution.

So the presentation and solution to the locked bell tower murder is not without interest, but the poor, threadbare story, wedged in between, makes Murder on the Campus merely a curiosity for impossible crime fans. However, what the movie lacked in plot ingenuity, it made up with likable performances, a good pace and an authentic period charm. Even with a poor plot, Murder on the Campus was still fun to watch, if only to see actual actors from the 1930s act out a detective story from that period. Something even the best modern adaptations can never replicate.

As of now, I've no idea what I'll read, or watch, next, but chances are that it will be another entry from Locked Room Murders: Supplement.
Geplaatst door TomCat on 3/04/2020