Ellery Queen's Mystery Magazine published a majestic pastiche in their May, 2007, issue, entitled "The Book Case," written by two long-time Ellery Queen fans, Dale C. Andrews and the creator of "A Website on Deduction," Kurt Sercu – anthologized a decade later in The Midadventures of Ellery Queen (2018). Generally, my purist streak makes it nigh impossible to enjoy pastiches, but "The Book Case" and its sequel can be counted among the exceptions. 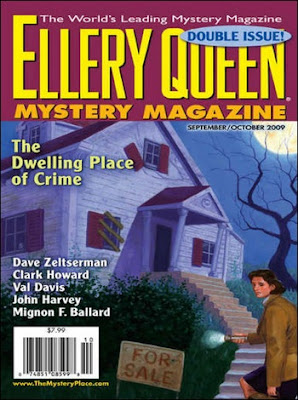 Dale C. Andrew's "The Mad Hatter's Riddle" has, as far as I can tell, only appeared in the September/October, 2009, issue of EQMM and the story stands with one foot each in a world of the EQ multiverse.

"The Mad Hatter's Riddle" takes place in 1975, a transitional year, in which the twentieth century took "a quick breath as it prepared for the final twenty-five-year dash to the millennium." A now seventy-year-old Ellery Queen had given up on writing detective stories and now only edits the magazine, but Universal Studios has hired him as a consultant on the shooting of a very special episode of NBC's Ellery Queen – based on one of his most popular short stories, "The Mad Tea Party" (collected in The Adventures of Ellery Queen, 1933). The studio wants to use the episode as vehicle to reunite two "fabled stars of yesteryear," Ty Royle and Bonnie Stuart, who are tagged to play Spencer and Laura Lockridge in the episode.

Bonnie and Ty have been out of the public-eye for nearly three decades, redrawing inside a "comfortable cocoon," where they lived a quiet, hermit-like existence. So the episode marks the first time in twenty-five years that "the once-married duo" appeared together. Something that was easier said than done. The studio had to hire another, one-time consultant, Jacques Butcher, who previously appeared in the Hollywood-period EQ novels The Devil to Pay (1938) and The Four of Hearts (1938).

The episode has to be ready to air in six weeks. So, naturally, the whole shoot threatens to come crashing down when Bonnie and Ty announce they are going to be married (again). Something that'll end the quiet, comfortable existence of the people around them.

A second problem comes in the form of a typewritten, acrostic poem reminiscent of an untitled poem by Lewis Carroll that revealed "the name of the real Alice," but this poem only revealed a cryptic message, "trip required no chances" – a prescient "warning in verse." On the day of their announcement, Bonnie and Ty are murdered at the place they were staying for the duration of the shoot (echoing the double death from The Four of Hearts). This is the point where the story, quality-wise, splits in two parts.

The solution to the murders is routine with a decent, but simple, dying message and an alibi-trick that, while a delight to long-time EQ fans, is a trifle unconvincing. I don't believe the huge discrepancy in time would have gone unnoticed. On the other hand, the answer to the titular riddle was excellently handled and the identity of the writer was a pleasant surprise. You've no idea how clever the title of the story is until you have read it. Even if it has a touch of sadness about it.

So, purely as a whodunit, "The Mad Hatter's Riddle" is a disappointingly weak story, but the presence of the acrostic poem elevates it as an excellent code cracker and the respectful treatment of the original characters makes it a first-class pastiche. A better Hollywood-set EQ story than the original and comes highly recommended to other EQ fans.
Geplaatst door TomCat on 2/26/2020