Hugh C. Weir was an American author, magazine editor and screenwriter who started out as a newspaper reporter for the Springfield Sun, in Ohio, when only sixteen-years-old and moved on from there to become a prolific writer of short stories, magazine articles and nearly three-hundred screenplays – together with Catherine McNelis he founded the McNelis-Weir Advertising Agency and Tower Magazines. A very industrious individual, to say the least, but he has been forgotten today and you can only find slight traces of him online.

Weir has an IMDb page listing such nuggets of trivia as his friendship with President Teddy Roosevelt or how personally wrapped "the hundreds of Christmas gifts" he gave out each year. A 2009 post on a now dormant blog mentioned Weir was an avid Charles Dickens collector and apparently had "one of the best and most complete collections of first editions" in the country.

These scraps offer a glimpse of a pleasant and successful man, but Otto Penzler revealed in the introduction to one of Weir's short stories, collected in The Big Book of Female Detectives (2018), that initial success of Tower Magazines ended abruptly in 1935 when the company went bankrupt – which was preceded by advertisers who claimed they had been "defrauded with inflated circulation numbers." McNelis was found guilty and sentenced to a year in jail. You didn't see that twist coming, now did you?

Weir died an early death in 1934, at the age of 49, while still being the editorial director of Tower Magazines and the world had soon forgotten about him. There is, however, one piece of his literary legacy that's slowly coming back to the attention of mystery readers.

During the early 1910s, Weir not only created one of the more originally realized "Rivals of Sherlock Holmes," but also one of the earlier female detectives, Miss Madelyne Mack ("what newspaper reader does not know the name?"). A former college girl who was "confronted suddenly with the necessity of earning a living" and decided to become a full-time detective when she nabbed a notorious shoplifter in a New York Department Store. A simple case that was to be first of many, often highly publicized exploits, such as placing "the chief of the firebug trust" in the docks and solving "the riddle of the double Peterson murder," which were chronicled by Miss Mack's loyal friend and narrator, Miss Nora Noraker – a newspaper reporter addicted to cola berries. So this series is a relatively late addition to the Sherlockian, casebook-style detective stories that were at the height of their popularity at the turn of the century.

However, Miss Mack and good, old Nora are not mere copies of Holmes and Dr. Watson in a dress with lipstick smeared across their faces. They're own characters with their own methods, opinions and philosophy on detective work.

Miss Mack explains that there are only two rules for a successful detective, "hard work and common sense," which, unlike the "uncommon sense" of Holmes (her words, not mine!), is simple, common business sense with a dash of imagination and likens it to solving a mathematical problem – instead of figures she works with "human motives." A simple approach of building, or subtracting, on the facts given until you arrive at the correct answer. Nora is a little closer to the archetypal, Watson-like narrator, but a very likable, affable Watson. 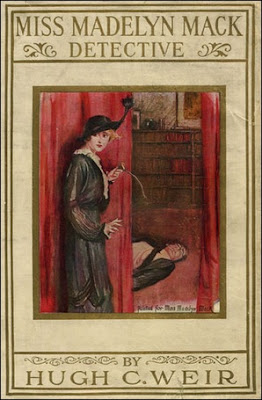 So how did this obscure, long-overlooked series of short detective stories appear on my radar? Two of the stories were listed by Robert Adey in Locked Room Murders (1991).

"The Man With Nine Lives" and "The Bullet from Nowhere" were reportedly first published in the July and October, 1914, issues of Macleans and collected in Miss Madelyn Mack, Detective (1914). However, I discovered "The Bullet from Nowhere" was previously published in the January, 1912, issue of The Cavalier and the Scrapbook, but was unable to find any earlier publication date for "The Man With Nine Lives." A story that was obviously the first in the series! So, not to make things needlessly confusing, I'll stick with 1914 as the accepted year of publication.

"The Man With Nine Lives" opens strongly with a good, lively introduction of the series-characters and setting the stage that begins when a letter arrives with a desperate plea for help.

Wendell Marsh is "one of the greatest newspaper copy-makers that ever dodged an interviewer" who writes to Miss Mack that no fewer than eight attempts have been made on his life during the past five months. Marsh has been dodging bullets, cars, thugs and has even found "a cunning little dose of cyanide of potassium" in his cherry pie, but believes his luck has run out and convinced a ninth attempt will be successful – imploring Miss Mack to come poste haste. But when they arrive, they're told that Marsh has been found dead in the library under inexplicable circumstances.

The library was "a wreck of a room" with shattered vases littering the ground, books were "savagely ripped apart" and the "curtains were hanging in ribbons," suggesting a violent struggle, but the only door was locked from the inside with the windows fastened as tight as a drum. So how did the murderer got out of the locked library? Even stranger, an examination showed there are no marks on the body or any trace of poison in it!

Unfortunately, the story belonged to a previous era of crime fiction and the painfully bad solution showed this in two ways. Firstly, the locked room is as dated as it's embarrassingly ridiculous and could have only been forgiven had it been written in the 1800s. But than again, I've come across exactly the same locked room setup, in a library, with nearly identical solutions in an episode of Jonathan Creek and a short story from Gigi Pandian's The Cambodian Curse and Other Stories (2018). So this idea is still being used today, but "The Man With Nine Lives" is where it may have originated. Secondly, not to be outdone by the terrible locked room-trick, the revelation of the murderer's identity was an even bigger embarrassment. I can't say anything more than that. 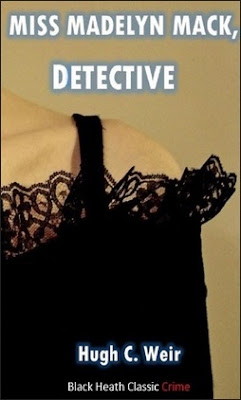 A story that opened promisingly, but got mired in a jumble of poorly handled, badly dated and cliched tropes in the end. My advise to read the introductory pages and move on to the next story. You're not missing anything.

Notes for the curious: (1) food and drinks feature prominently in the story (cherry piece, strawberry shortcakes, chocolate ice-cream sodas and berries) and now wonder what an ice-cream soda from 1914 would taste like (2) I discovered a Dutch hoorspel (radio-play) from 1993 of this story, "De man met de negen levens," on the Internet Archive. The play was directed by Hans Karsenbarg who played the police pathologist, Dr. Den Koninghe, in the Baantjer TV-series. What an obscure link to the series that introduced me to the detective story!

The second and final impossible crime story of the series, "The Bullet from Nowhere," hasn't aged gracefully either, but, on a whole, worked much better as a locked room story with a more conventional setup and execution of the trick – one that was fairly original at the time. The scene of the crime here is the music-room of Homer Hendricks, a talented musician, whose climax to "the wild spirit" of the storm scene from William Tell is cut short by "the sudden, muffled report of a revolver." When the door is broken down, Hendricks is found huddled on the floor next to the piano with a bullet in his head. But where's the gun? And how did the murderer vanish from the locked music-room?

Lieutenant Perry believes the household is either "covering up the fact of suicide" or "trying to shield the murderer." So they call in the services of Miss Mack and Nora.

"The Bullet from Nowhere" benefits from being shorter in length and ending with a solution that probably was a bit more novel in 1914 than in 2019. Some of you probably already have an idea how the locked room-trick works, but appreciated that it was not as godawful as the one from "The Man With Nine Lives." And the place of the bullet wound even threw me off for a couple of seconds. A piece of misdirection mystery writers would come to better utilize in the succeeding decades.

All in all, "The Man With Nine Lives" and "The Bullet from Nowhere" are, plot-wise, nothing more than curios with some historical interest as possible originators of two (locked room) solutions, but the main draw of the series are the leading characters, Miss Mack and Nora – who were more engaging and original than the cases they got to solve. So the series only really has something to offer to genre historians or readers with a special interest in female detective-characters.

I probably won't read the rest of the series anytime soon, but, if you're interested, Miss Madelyn Mack, Detective is available as a dirt cheap ebook from Black Heath or as a 4-in-1 paperback anthology from Coachwhip Publications (together with three other short story collections). Or you can just grab it from the Internet Archive.
Geplaatst door TomCat on 10/14/2019