Beware of the Dog: Case Closed, vol. 70 by Gosho Aoyama

The 70th volume of Gosho Aoyama's Case Closed, originally titled Detective Conan in Japan, is composed of two grand stories, involving Harley Hartwell and Kaito KID, but the opening chapter concludes the story that began in the last two chapters of the previous volume – in which the Junior Detective League uncover a dark crime in an empty house haunted by piano music. A very minor and forgettable story.

However, the next two stories are wonderfully done homages to Sir Arthur Conan Doyle's The Hound of the Baskervilles (1902) and Maurice Leblanc. 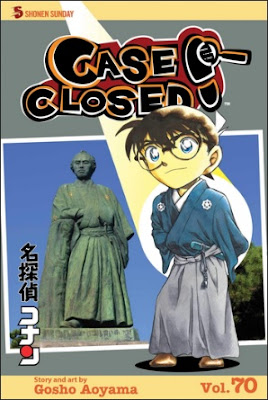 One of my favorite recurring side-characters returns in the first story, Jirokichi Sebastian, whose foil is that elusive master magician of thievery, Kaito KID, but this time, the game is played a little bit different without the grand traps and counter plots of their previous encounters – e.g. volumes 61, 65 and 68. Aoyama came up with good reason that makes this such an interesting and unusual story.

The story is set against a revival of public interest in a historical figure, Ryōma Sakamoto, who was revolutionary reformer instrumental in setting the stage for the Meiji Restoration in 1868. Jirokichi Sebastian has opened an exhibition devoted to him at the Great Sebastian Museum and the centerpiece is "the jeweled gun belt" that was gifted to Ryōma, which has "a huge ruby embedded in the buckle." Shishihiko Tarumi is the sleazy owner of the belt and had the item authenticated by a shady appraiser, Masanosuke Hanamura, but refused to sell it to Jirokichi. Only agreeing to loan it to him for exhibition.

Normally, the gun belt would be used as bait in an attempt to trap Kaito KID, however, the thief has announced that he'll be visiting the Ryōma exhibition soon, not to steal the gun belt, but "to return three items" that were stolen twenty years ago – namely a half-finished letter, a drinking cup and a Smith & Wesson model 1 revolver. A gift from America that went with the bejeweled belt. These historical items were stolen by "a famous thief and mistress of disguise from the Showa Era," The Phantom Lady, who employed "theatrical tactics straight out of horror movies" to steal from "corrupt companies and crooked millionaires." And the story suggests she's related to KID.

So here the problem is not how KID is going to take a valuable object from the museum, which Jirokichi turned into "a high-tech rat trap," but how he's going to return the stolen loot from twenty years ago. This involves a minor, quasi-impossible problem: how did KID get the revolver pass the metal detector and three security gates.

On a whole, this was a fun little caper with clever bits, such as why KID's scheme required a rainy day, but the inverted take on the traditional heist stories in this series is what made it a truly memorable meeting between Conan, Jirokichi and KID.

The second story is Aoyama's homage to Doyle's The Hound of the Baskervilles with a dash of Seishi Yokomizo's Inugamike no ichizoku (The Inugami Clan, 1951), which found a completely new way to explain the presence of a spectral beast hounding members of a cursed family to their deaths. A story that begins when Harley Hartwell and Kazuha visit Richard Moore, Rachel and Conan to entice them to join them on a real-life counterpart of the Baskerville case. 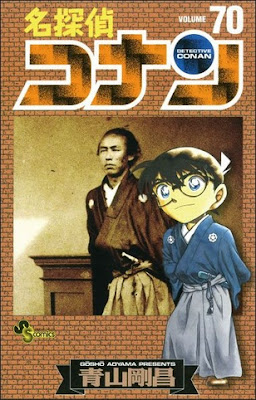 Five years ago, the chairman of the Inbushi Group, Tsunechika Inubushi, died of terminal cancer, but, after his death, "tons of people showed up at his family's doorstep" claiming to be his love-children – claims backed up by photos of their mothers with the chairman. However, while the claims could not be fully proved, his widow adopted no less than eight of them! More importantly, the vast family fortune will be divided between them when the now sickly widow dies. And this makes it very suspicious that two of them have died under peculiar circumstances.

One of the victim's fell off a cliff, but lived long enough to tell he had been chased by "a demon dog with a body of blazin' fire." Reputedly, one of the heirs is an impostor with a grudge against the family and is trying to eradicate the bloodline by "summoning a spectral hound."

Hartwell became involved with the case and traveled to Tokyo to talk with one of the heirs, who left the family estate and renounced his inheritance, but they arrived too late. The man is found dead, besides a charcoal stove, with the door and windows sealed with duct tape. A classic locked room mystery, but Conan and Hartwell immediately solve the problem, which I suspected (considering the situation) would borrow its solution from a relatively well-known impossible crime novel by a famous mystery writer – which was not the case. The trick used here is pretty daring and dangerous, but could have been improved by adding a single detail to the murderer's plan.

By the way, the name of the victim happens to be Shinichi Kudo, which is Jimmy Kudo's (Conan) name in the original Japanese manga. There is, however, no deeper meaning to them sharing the same name.

What does deepen the mystery is the explanation to the problem of the sealed room and they decide to go down to the Inubushi estate to tackle the demonic dog head on. But what they got is another murder, a trail of blazing paw-prints and they even witnessed the flaming dog on two separate occasions. On the second time, it attacked one of the heirs before vanishing as if by magic in the dark night.

After a while, the murderer is relatively easily spotted and the explanation for the flaming paw-prints is not entirely convincing, although the clue of the smell of rotten onions was clever, but the trick behind the spectral dog with a body of fire was brilliant – a trick demonstrating that modern innovations hasn't made clever plotting obsolete. This story is basically a retelling of Doyle's The Hound of the Baskervilles with a modern interpretation of the ghost-trick from Jacques Futrelle's "The Mystery of the Flaming Phantom" (1907). A great story to close out this milestone volume.

So, all in all, this is a solid volume with two great stories featuring some of the series most popular recurring side-characters, which made the weak story that opened it more than forgivable. And now, onwards to volume 80!

On a final note, I compiled a list back in April of my five favorite locked room mysteries and impossible crimes from this series, which you can read here, if you're interested or missed it.
Geplaatst door TomCat on 9/16/2019