Takemaru Abiko is a founding member of the shin honkaku movement in Japan and one of the mystery writers who emerged from the ranks of the Kyoto University Mystery Club. 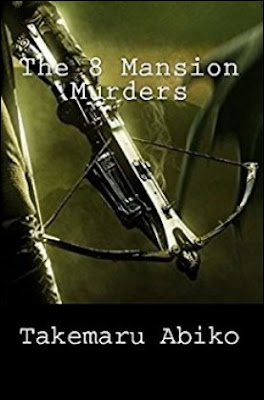 During the 1980s, members of the Mystery Club would gather in the living room of the man who would later launch the neo-orthodox movement in Japan with Jakkakukan no satsujin (The Decagon House Murders, 1987), Yukito Ayatsuji, to discuss plot-ideas for honkaku-style detective stories and have "lively discussions about the mystery genre in general" – one of the members who almost always there was Abiko. So it was only a matter of time before John Pugmire of Locked Room International peddled one of his impossible crime novels across the language barrier.

Shinsoban 8 no satsujin (The 8 Mansion Murders, 1989) marked Akibo's debut and the book was, as usually, translated by our very own Ho-Ling Wong and introduced by the doyen of shin honkaku, Soji Shimada. Shimada noted in his introduction that, if you listened to them back in the days, you could have mistaken the bantering members of the Mystery Club for aspiring comedy writers, but "comedy is a trademark of Abiko" and debuted with a humorous, lighthearted homage to John Dickson Carr that even comes with the obligatory locked room lecture concentrating on quasi-locked rooms – which is "a space which might not be physically sealed." Such as rooms under observation or an unbroken field of snow.

The 8 Mansion Murders takes place in the home of Kikuo Hachisuka, President of Hachisuka Construction, which is a three-story mansion with an inner courtyard on the ground floor. The first and second floor have covered galleries connecting the east and west hallways. When viewed from the sky, the mansion looks exactly like the number eight and this is why the place is commonly referred to as the 8 Mansion.

This bizarre mansion was "designed without any consideration for efficient use of space or ease of living," but "the layout of this very mansion" provided the murderer with a fully prepared stage for a deadly magic trick. We see the unknown murderer pouring over the diagram of 8 Mansion in the prologue.

The 8 Mansion Murders begins one early, sleepless morning in the room of Hachisuka's granddaughter, Yukie Hachisuka, who has company from her sign language teacher, Mitsuka Kawamura, when they hear someone in the gallery and looking out of the window they're surprised to see Yukie's father, Kikuichirō Hachisuka – who's the Vice-President of Hachisuka Construction. Suddenly, an arrow cuts through the air and strikes Kikuichirō down. Yukie and Mitsuka are knocked unconscious when they run out to help Kikuichirō. When they regained consciousness, Yukie and Mitsuka discover that the body has been moved. 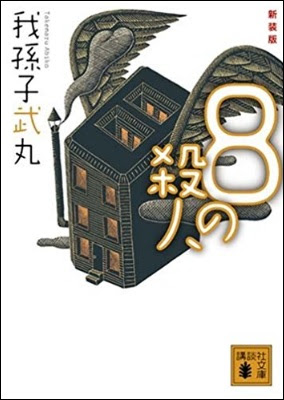 A baffling and dastardly murder, but where, you ask, is the impossibility? Well, Yukie and Mitsuka saw the room from which the murderer loosened the deadly arrow, but the problem is that the room in question belongs to the son of the family caretaker, Yūsaku Yano, who claims to have been asleep at the time of the murder with the door locked on the inside – immediately making him the number one suspect. Yūsaku's situation does not improve when the police learns he owns a crossbow that has gone missing.

Enter Inspector Hayami Kyōzō of the Metropolitan Police Department, Criminal Investigation Division 1 (Homicide), accompanied by his subordinate, Kinoshita, who provide some of the comedy in this story. Sometimes their comedic bits bordered on old-fashioned slapstick. Hayami takes pleasure in placing his subordinate in harm's way and Kinoshita emerges from this whole ordeal resembling a battered, battle-scarred warhorse ("obviously immortal"), but Hayami does not escape unscathed himself. Hayami has a younger brother and sister, Shinji and Ichio, who love detective stories and teasing their older brother. Ho-Ling said in his 2012 review of The 8 Mansion Murders that "Abiko really likes teasing his characters" and placing them in "awkward situations" to "see them suffer." This is definitely true when it comes to poor Kinoshita. He had his human rights violated here. I still smiled though.

However, it's not Hayami who solves the crossbow murders at the 8 Mansion, but his younger brother, Shinji, who normally runs a coffee shop and even delivers a solid locked room lecture, but not before one of the witnesses is murdered under seemingly impossible circumstances – nailed to a locked door with an arrow. There's an open window in the room. Only problem with this scenario is that the window could only serve as an entrance, or exit, if the murderer has the ability to "fly around freely anywhere in the house." I actually liked this second impossibility, minor as it is, much more than the central murder. A simple, believable and original play on the Merrivalean cussedness of things in general. As if "John Dickson Carr’s ghost himself had been behind it all." I do think this locked room trick would have been better suited for a short story, but appreciated its inclusion here nonetheless. 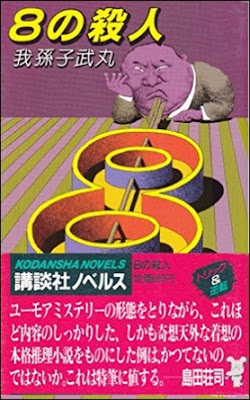 On the other hand, the central puzzle of the impossible murder in the gallery and the arrow shot from a locked and occupied room was a mixed bag of tricks.

I immediately understood how the locked room trick was worked, but only because the principle behind the illusion is as old as Rome. I have come across countless variations on this trick. So the impossibility itself can hardly be called original, but this age-old trick was very well handled by Abiko. I found it very inventive that the problem here is not how a man could have vanished from a locked room, but how two witnesses could have seen "a person inside a room he couldn't have entered" or why the murderer had to move the body around in the gallery – showing a young mystery novelist full of promise. Abiko also has an impeccable taste in detective stories going by the references to other mystery writers and detective characters. Particularly Carr!

I think The 8 Mansion Murders goes hand-in-glove with the impossible crime novels of other admirers and followers of the master of the locked room problem, such as John Russell Fearn, Paul Halter, Derek Smith and David Renwick, but you have to be a little familiar with Carr's work to fully appreciate Abiko's homage. Just like Jean-Paul Török's tribute to Carr, L'enigme du Monte Verita (The Riddle of Monte Verita, 2007), which has also been translated and published by Pugmire. Nevertheless, in spite of these obvious ties to Carr's work, I thought The 8 Mansion Murders was much closer, in spirit, to Leo Bruce's locked room parody Case for Three Detectives (1936). The 8 Mansion Murders is not a parody of Carr, but the humorous tone of the story and the interaction between the detectives struck me as closer to Bruce than anything Carr wrote. Yes, Carr wrote mysteries with slapstick comedy (e.g. The Skeleton in the Clock, 1948), but even they felt very different from what Abiko did here. But that's only an observation.

So, in closing, The 8 Mansion Murders is a fast, fun read with two impossible crimes and an amusing cast of detectives, which comes especially recommended to locked room enthusiasts and fans of Carr. They'll get the most enjoyment out of the plot and story.

Oh, just one more thing. I hope you don't have any personal plans this summer, Ho-Ling. The Hungry Goblins demand more of this! :)
Geplaatst door TomCat on 7/07/2018