"After all the risk and labour of cremating the body... there had still been left clear evidence that a man had been murdered."
- Dr. John Thorndyke (R. Austin Freeman's The Stoneware Monkey, 1939)

Margaret Armstrong was an American magazine illustrator, book designer and author of three standalone mysteries, which garnered praise from the eminent Howard Haycraft, but she also caught the attention of a present-day genre-historian, Curt Evans – who called her most famous detective novel "a worthy enrollee in the Mary Roberts Rinehart school of crime fiction." But the story, pleasingly, "emphasizes detection over the inducement of shudders and shivers."

The book in question was Armstrong's debut mystery, Murder in Stained Glass (1939), rapidly followed by The Man with No Face (1940) and The Blue Santo Murder Mystery (1941), for which she drew on her own family legacy. Armstrong's father and sister, David and Helen Armstrong, were well-known artists in the field of stained glass. So the plot has a whiff of authenticity. 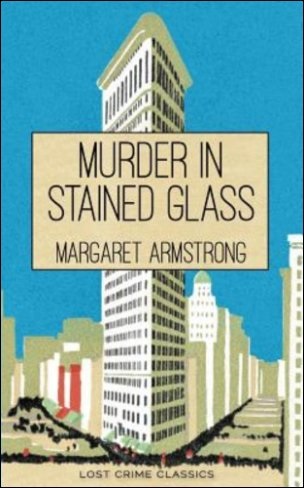 Murder in Stained Glass begins with a traditional reflection that gave the "Had-I-But-Known" school of detection its name: the protagonist, Miss Harriet Trumbull, ponders how the weather "often made a lo of difference in people's lives" and if "the sun had not been shining on one particular Monday afternoon," last March, events would have taken a different course or not have happened at all – since she would have been present in Bassett's Bridge. A quaint, rural town in Connecticut, USA.

Miss Trumbull was invited to the home of an old friend, Charlotte Blair, who lives in the New England countryside, in a rather gloomy place, where she also has a cousin, Phyllis Blair, staying as a guest. She's also the one who drove Miss Trumbull to the family home and on their way they pass the glass shop of the famous stained glass artist, Frederick Ullathorne. The famous artist used to have his studio in New York, but moved shop to Bassett's Bridge, because he hates publicity and visitors kept walking on him after he secured a commission for a cathedral window – which threw the short-tempered artist into a rage.

A temperament that also manifested itself in a quarrel between the artist and the man in charge of firing the glass, Jake Murphy, who, according to Ullathorne, used some red flash, a sort of glass they rarely use, in the big cathedral window. It would be "ripped out as soon" as possible and Jake would be docked for what it cost, but Jake told his boss "he'd see him in hell first." We also learn that Ullathorne not only has a temper, but also petty, as he's jealous of his own son, Leo.

Ullathorne never wasted much money on educating his son and used the good-looking boy as a model, but recently, he began to see Phyllis. A woman his father is interested in. So these are exactly the kind of disturbing undercurrents one expects to find in a detective with a small village setting and not long after Miss Trumbull's arrival a young worker from glass shop announces he has found charred bones in the kiln. And here I have to point out an amazing coincidence.

Murder in Stained Glass was published in the same year as R. Austin Freeman's The Stoneware Monkey (1939), which also dealt with an artist's studio and the cremated remains of a murder victim in a kiln. The similarities end there, but the circumstances in which the victims were disposed of by the murderer were very unusual and the only two (known) examples were released in the same year. However, the time between the writing and publications of both novels were too short for one to have influenced the other, but still a noteworthy coincidence and you have to wonder if something at the time gave both authors a similar idea – such as an article about a real-life case or simply a book we're not aware of. Who knows?

Anyway, the evidence in the glass shop, a bullet-hole in a window and a recently washed axe, suggests the victim was shot, chopped to bits and stuffed in the kiln. The floor slopes down to the drain, in the corner, which would have made it very easy to clean up the whole mess in mere minutes. But who was killed? Ullathorne has not yet returned from New York and Jake seems to have disappeared.

Miss Trumbull showed herself to be "a regular gadfly," or a "Meddlesome Matty," when she decides to stick her nose into official police business. She pokes around for a mysterious figure from Ullathorne's sketchbook, "the dark lady," which proved to be skillfully tied to a second murder. Usually, these additional murders, occurring late in a story, turn out to be filler material and the overall plot could easily do without them, but here such a late body proved to be very important to the plot. A plot that was cleverly constructed and pleasingly toyed around with a classic trick, which was applied here with some originality. There was also an interesting and late clue of a vandalized, stained glass window.

But as good as the plot was the writing, pacing and some of the characters. I particular loved Armstrong's depiction of Bassett's Bridge, which is awash with rumormongers and the village is described as "having a grand time" - as they have not "enjoyed themselves so much since McKinley was shot." A very honest description of the gossip-and rumor mill of a such a small place as Bassett's Bridge.

She sketches an interesting, if unlikable, portrait of the policeman in charge, Skinner, who seems to have a severe lack of scruples. Early on, he tells Miss Trumbull he first success came when he jailed, a presumable innocent, man on an arson charge, because the old guy was "better off in jail than anywhere else." At one point, he rushes off to "third degree" a tramp, but later admits it was "a washout" and, "what was left of him," was let go in the end.

So, all in all, I found Murder in Stained Glass to be a solid mystery novel, which had a pleasant balance between plot, characterization and setting. As a bonus, there was the specialized background about stained glass casting the story in "a blaze of colour and light." It give the book itself a bit of character. My sole complaint is the rather short length of the book. A little more than a novella, which made for a quick, fast-paced read. A very, very quick read.

Regardless, the praise Armstrong received is well-deserved and I can recommend Murder in Stained Glass as a nice little example of the Golden Age detective story.
Geplaatst door TomCat on 1/06/2017