On a Dark, Grimy Night

"When you follow two separate chains of thoughts, Watson, you will find some point of intersection which should approximate to the truth."
- Sherlock Holmes (Sir Arthur C. Doyle's "The Disappearance of Lady Frances Carfax," from His Last Bow: Some Later Reminiscences of Sherlock Holmes, 1917)

Lenore Glen Offord wrote only eight mystery novels during her lifetime, but amassed a bulky body of work as a critic and served as a reviewer on the staff of the San Francisco Chronicler for over thirty years – a gig which landed her an Edgar Award for Outstanding Criticism in 1952. Nonetheless, it would be a capital mistake to overlook Offord as a mystery novelist.

The Glass Mask (1944) successfully employed a "perfect murder" ploy and refused to fall back on a cop-out for a happy ending, which firmly anchored the book on my list of all-time favorite detective stories. It's also one of the better village mysteries I have read. My True Love Lies (1947) revealed it self as a wonderful, artistically themed standalone novel with an equally wondrous, double-twisted ending and provided a clever answer as to why a murderer would hide a body inside a clay model. 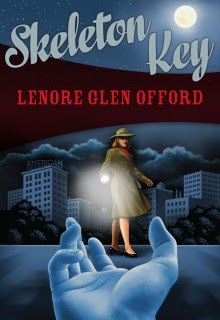 So I was glad to learn Felony & Mayhem had reissued Skeleton Key (1943), which offered an avenue for further exploration of her work and introduced her series-characters – Georgine Wyeth and pulp-writer Todd McKinnon. Georgine Wyeth was introduced to the reader as a strikingly modern character: a workingwoman and widowed mother of a seven-year-old girl, which left her barely with any time for a personal life. It's during one of her ungrateful jobs that the reader catches a first glimpse of her.

Georgine is roaming a cul-de-sac in Berkeley, California, called Grettry Road, carrying a miniature briefcase full of magazine-subscriptions, but they so far remained blank. Nobody seemed interested and there even appeared to be "a sudden wave of sales resistance," which lead to the reflection that she couldn't "sell water to a desert tank corpse," but an opportunity presents itself when a case of mistaken identity gains her entrance to the home of an eccentric professor – who, according to "the consensus of the neighborhood," is perfecting "a Death Ray" in his laboratory!

In actuality, the suspiciously minded scientist, Alexis Paev, is looking for a scientific-illiterate typist to convert his large collection of notes into typescript. It's a job worth a hundred bucks. Luckily, Georgine is fabulously ignorant of such subjects as chemistry, physics and bacteriology. So why not paunch on the opportunity to earn some extra money?

However, the job requires her to be a temporary resident of the dead-end street, because the professor is adamant that not a single page is carried off the premise.

As a new resident, Georgine "noted with amusement" how much Grettry Road "resembled a village," in its semi-isolation, but without the public knowledge of everyone’s private affairs and the inhabitants viewed her as "a fresh mind on which everyone was eager to stamp his own impressions" – which positioned her in the role of social observer. It's in this position that she involuntarily amasses an astonishing amount of knowledge about the locals.

A wealth of information that proved its worth when the local air-raid warden, Roy Hollister, is killed during a blackout in what appears to have been a freak accident, which occurred when "a driverless car plunged downhill" and "struck him as he was going on his rounds." Georgine had noticed during a block meeting Hollister "wardened harder" than anyone she ever saw and how "he had sort of impact on people" that she "couldn’t define or explain." Obviously, there are one or two potential motives hidden just beneath the surface.

The semi-isolation, village-esque quality of Grettry Road begs for a comparison with the English village mysteries of Agatha Christie, but what truly gave the book a British twang was the blackout angle. It's a part of World War II that's seldom played up in American mysteries from the period and therefore became closely associated with English mysteries, which was used by practically every writer active at the time. But the only other American mystery novel I can think of (from the top of my head) using/mentioning blackouts was Frances Crane's The Pink Umbrella (1943).

A well-drawn backdrop, affected by America's entry into the war, coupled with an interesting, somewhat original motive lifted the plot slightly above average, which was a nice result since the book was evidently a vehicle to introduce and establish the new series-characters – by bringing Georgine and Todd together. The only part of the book I found truly disappointing was how the disappearance of one of the characters was presented as an impossible problem,  someone was heard running up a flight of stairs and "at the top had vanished into thin air," but the magic was quickly dispelled and revealed as merely a misundertood situation on the part of Georgine. Oh well.

All in all, it was still a nicely written mixture of plot and characters that resulted in a good, but not outstanding, detective novel with an interesting WWII background.

Well, that's the best I could do with this review and I'm not if I can squeeze in another review before the end of the year, but there will be a best-of/worst-of list. I just haven't decided yet if they're going to be separate lists or simply merge them into one long, rambling blog-post. So stay tuned.
Geplaatst door TomCat on 12/27/2015