"A fairy tale in terms of blood--a world in anamorphosis--a perversion of all rationality... It's unthinkable, senseless, like black magic and sorcery and thaumaturgy. It's downright demented."
- Philo Vance (S.S. van Dine's The Bishop Murder Case, 1928)

Well, I told you the next review wouldn't take another month to appear, didn't I? O ye, of little faith! However, I did found myself in a spot of trouble in finding my next read, because I'm still waiting for a package to arrive. So I was forced to climb Mt. To-be-Read to pick something from the old stack of unread detective stories, which became surprisingly easier when I decided it had to be something obscure and The Monk of Hambleton (1928) seemed to fit that description. 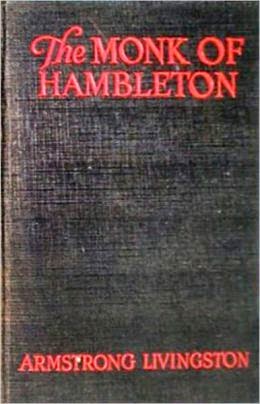 The Monk of Hambleton was penned by Armstrong Livingston, who's apparently one of those mystery writers too obscure for even the GADWiki, but the capsule-biography in front of the book notes that the author was born in New York City, made his home in Algiers with his wife and began writing in 1918 – which resulted in such novels as The Mystery of the Twin Rubies (1922), Trackless Death (1930) and the (now) ambiguously titled Light-Fingered Ladies (1927?).

I have Trackless Death jotted down on my never-ending wishlist, because Robert Adey has it listed in Locked Room Murders and Other Impossible Crimes (1991), but The Monk of Hambleton is my first, favorable exposure to Armstrong Livingston's work. The best way to describe the story is Charles Dickens' A Christmas Carol (1843) as perceived by Sir Arthur Conan Doyle with a pinch of Scooby Doo. There's even a young, female investigative operative, named Kitty Doyle, who plays the Miss Climpson to Peter Creighton's Lord Peter Wimsey in the endgame of the story. But that’s skipping ahead of the story.

Varr & Bolt Tannery occupies a couple acres of ground nearby the village of Hambleton and while the weather-beaten, shabby looking buildings of the leather plant may give the appearance of a neglected company, it's actually a thriving business – under the harsh, unrelenting rule of Simon Varr. The opening of the story mentions that it's said of Varr that "he knew how to exact the last ounce of efficiency from men and material without the expenditure of a single superfluous penny," but a strike has brought his efficient machine to a grounding halt. On top of that, Jason Bolt, "a minor partner in the business," is suffering from expansionism and his son, Copley, wants to marry the daughter of the tannery's manager, Mr. Graham – who, in turn, finally wants to be a partner instead of drawing a regular salary.

However, Varr is determined to bend everyone and every situation to his will, including a radical end to the strike, but it seems the universe itself has turned against Varr: his kitchen garden is raided, the first love of his wife, Leslie Sherwood, unexpectedly returns to the village, as did his wife's sister, October "Ocky" Copley, after spending twenty odd years in Asia followed by arson and theft! Varr's stalwart determination is really tested after a late-evening encounter with the legendary and titular monk of the village – who points an accusing finger like the Ghost of Christmas Yet to Come.

Livingston even included an imaginary passage from The History of Wayne County about the origin of the legend and included this foreboding doggerel:

"Who meets the monk at crack o' dawn
Shall rue the day he was born.

Who meets the monk in light of day
Woe goes with him on his way.

Who meets the monk when dusk is nigh
Within a fortnight he shall die."

It's simply a play on the Irish Banshee legend, but fun nonetheless, especially in a detective story!

Simon Varr didn't fare as well in this story as Ebenezer Scrooge did in his, because he simply couldn't catch a hint, and the spectral monk strikes him down in his kitchen garden with an old, Persian-inscribed dagger – reading "I Bring Peace." This scene was delightfully old-fashioned, second-tier stuff, in which Varr dramatically removed the mask in a "What? You!" moment right before being stabbed. So cheesy.

Peter Creighton is a reputable private investigator from the Big City, who was supposed to come, anyway, to investigate the arsons at the tannery, thefts and the ghost, but now has a fresh murder on his hands. I think Livingston purposely made Creighton the exact opposite of his more famous colleague of the time, Philo Vance. Creighton is a modest, nondescript professional instead of a posh dilettante with an intimate knowledge of obscure subjects, which Livingston made a point of by making Creighton say he couldn't read Persian. You just know if this had been Van Dine's The Strike Murder Case, Vance would've revealed himself as an amateur expert on the ancient Persian Empire often consulted by genuine historical authorities on the subject. It would've also been his most terrifying and challenging murder case since triumphantly ending the previous one.

Anyhow, Creighton's woolgathering technique gathers more tangible clues such as the chips of blue steel, finger prints, written notes, shadowing witnesses and the implications of the shallow footprints concerning a small educated man or a large illiterate one. A nice dash of Chesterton, I think!

And nice would be a good summarization of The Monk of Hambleton. Livingston has a nice, pleasant, albeit dated, writing style suiting the backdrop of a now bygone era, but the plotting was still (partly) in a previous era – making it not all that difficult to anticipate the eventual ending for the seasoned mystery reader. The normally clichéd ending of the dying murderer/confession was handled better that I could've hoped for. So there's that.

In closing, The Monk of Hableton is a better-than-average, second-tier mystery novel from a period that didn't count the most prosperous years of the Golden Age in its decade, but this book definitely was a sign of things to come. (I consider the 20s as the start-up years with the 30-and 40s as the Golden Decades and winding down in the 50s).