Out of Time's Abyss

Before taking a stab at reviewing an impossible crime novel from the heyday of the detective story, I want to direct your attention to a post I compiled last year, "My Favorite Locked Room Mysteries I: The Novels," which I updated a few days ago. I've added and replaced numerous titles that made list bulkier than it was before. So if you’re looking for suggestions for your TBR-pile, you might want to take a peek at the new list.

David Duncan's The Shade of Time (1946) was favorably commented upon by Robert Adey in Locked Room Murders and Other Impossible Crimes (1991), "more than just an excellent essay on the locked-room theme" and "first-rate detective novel from a writer better known in the science-fiction field," and I agree, if you single out the impossible material in the book – which is there in abundance. But in my opinion, I think Adey over praised Duncan's overall contribution to the locked room sub-genre. However, that's not to say that The Shade of Time is not without merit and personally liked the theme of the past rising up to obscure the present. 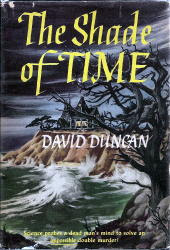 The premise and opening shares some similarities to the last mystery I reviewed on here, The Case of the Drowning Duck (1942) by Erle Stanley Gardner, in which a murder that was shelved as solved with the conviction of the murderer is reinvestigated – except that the wrongfully accused man in this story lived to conduct his own investigation upon his release from prison.

Sebastian Sand was convicted for murdering John Harth, a promising physicist laboring on the atomic displacement theory, with an arrow to the chest in his sun-porch converted laboratory on the strength that Sand was the only other person in Harth House at the time of the murder – arguing that the arrow could not have been loosened from the outside because there were no broken windowpanes. A windowpane next to the door had to be smashed to unlatch the door, but it's a spring-lock (of sorts) that snaps into position after you close the door behind you and everyone else was accounted for at the time of the murder outside of the house. The influential Harth family also did their part in helping Sand to be convicted in order to keep him away from John's sister Constance.

A decade later Sand is pardoned and conspires with two of his friends, Ray and Alice Kingsley, in arranging a reunion party at Harth House to find the person responsible for the murder of John Harth by playing mind games and staging a reconstruction of the crime – in an attempt to prove the displacement theory that would allow an arrow to pass through a pane of glass without shattering it. Unsurprisingly, something goes horribly wrong when Sand fires an arrow at the supposedly empty and somewhat overgrown laboratory, as dim and ghost figure looms up in the window, taking the projectile full in the chest! The theory of atomic displacement and how it was entertained for a while was a nice a substitute for ghosts and curses that commonly haunt these tales.

What looks at first glance as a foolish, but genuine, accident slowly, but surely, begins to look more and more impossible as the official investigators gather more facts and what happened to create this second locked room killing is more worthy of that label than the first one – which was more a question of alibis than trickery. Even if the overall effect of this second locked room is a patchwork of ideas most readers are bound to recognize. Still, I can understand Adey's praise because the most fun part of the book was the discussions of the seemingly impossible elements in the case including a bunch of false solutions.

By the way, the official investigators I referred to are Jim Quigley, a highly educated chief of police, and a Dr. Cook, who are introduced in the opening chapters of the book discussing the Harth case and meet a few more times before they officially become involved in the second shooting incident and Quigley handed me the idea of quoting Dr. Gideon Fell for this post.

I'm sure that Duncan was familiar with John Dickson Carr, and other mystery writers who dabbled in the miraculous, and Quigley seems to have been attempt at a cast-off of the Great Detectives and he has his own ideas on crime, like a disease it should be prevented instead of solved, but does nothing himself but sit around waiting for something to happen at Harth House. Why test your theory when an opportunity presents itself and safe a life in process? Anyway, in the second chapter Quigley said, "if it was a classic case, it was classic in the sense that the police couldn't possibly go wrong,” appending, “and in spite of it all, the police possibly did go wrong,” which is something that would've no doubt infuriated someone if Dr. Fell or H.M. had uttered it. And it reminded me of that quote from that radio play that now only exist in it entirely as a typescript.

But Duncan was far from the writer that Carr was, and while the locked room elements and discussions were good reading, the writing and characters were not and closer to Anthony Wynne – another locked room specialist scuttled for his embarrassing and unrealistic melodrama and often bad writing but still had some good plots. I'll probably get some flack for bringing up Paul Halter, an impossible crime from the past parroted in the present is a hallmark of his fiction and his characters have a tendency to feel out of their time, but for all his faults, Halter is leagues better as a mystery writer than Duncan was. Now that I think of it, I wonder what Halter would've done with this plot since Quigley and Dr. Cook could easily be swapped for Owen Burns and Archilles Stock.

To sum this lengthy, rambling review up is that David Duncan's The Shade of Time has points of interest as a locked room/detective problem, even if bits and pieces of the plot became muddled and confusing towards the end, but otherwise, it falls short of the mark and the interesting points aren't strong or original enough to make it eligible for my list of favorite impossible mysteries.