"Who is in charge of the clattering train..."

"...Death is in charge of the clattering train!"
- Edwin J. Milliken (Death and his Brother Sleep)

C. Daly King opened one of his lauded mystery novels, Obelists Fly High (1935), with the epilogue of the story and thought it would be a nice touch to begin this post on Todd Downing's Vultures in the Sky (1935) in a similar vein: it's as if we have entered a period of redemption! 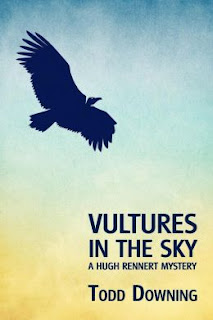 As the post-title and opening quote suggests, Vultures in the Sky takes place aboard a passenger train bound for Mexico City, but sundry shadows are cast over the journey and not all of them are from the zopilotes (vultures) dotting the desert sky. Rumor filled compartments of an impending railway strike and saboteurs of the Cristeros (a religious splinter faction) become the prowling ground of a murderer who snuffed out a passenger before he even boarded the train! There's even talk that there may be people aboard who are connected to an infamous kidnapping case, which is not entirely coincidental, as Curt mentioned in his review that Downing had "read Christie's Murder on the Orient Express (1934) the year he began writing Vultures and he immediately praised the Crime Queen's novel unreservedly" – giving perhaps the first of many nods to one of the most famous whodunits ever written.

Downing's regular detective, Hugh Rennert of the United States Treasury Department, Custom Services, tries to take charge when he suspects foul play after one of the passengers, an American of Mexican extraction named Torner, dies while they passed through a darkened railway tunnel and Rennert does not entertain the theory that it was the bad air in the tunnel that got to him. He receives official clearance to take charge of the case, until they reach their destination and the proper authorities can take it from his hands, but this murderer is not deterred by red tape and continues to plough through the list of passengers.

I wonder if Vultures inspired the opening sequence of Stuart Palmer's The Puzzle of the Blue Banderilla (1937), in which Inspector Oscar Piper is on a train heading for Mexico City when a customs inspector takes a sniff from a bottle of cheap perfume and falls to the floor in a dead faint.

The plot rattles along at a nice, but brisk, pace and Hugh Rennert functioned as both a knowledgeable guide, who speaks his languages and appreciates the culture and history of the land, and as a proper detective – trying to make sense of hatboxes and the movement of suspects. In many ways, this was the kind of detective story that I was hoping to find when I picked up Downing's The Cat Screams (1934), actually two years ago this week, and I think my poorly written, two-year-old review still conveys my lack of enthusiasm for the book. I actually referred to Clyde B. Clason in that review and I think Vultures compares best to his work except that we move from the remnants of an erstwhile civilization, piled up in a private museum or library, to a railway track carving through the deserts of Mexico – where everything is very much alive as opposed to dusty museum pieces in the possession of a soon to be murdered private collector (c.f. about half of Clason's output).

Downing redeemed himself with Vultures, after my initial disappointment over Cat, and second chances appears as of late to be a trend on this blog. Zelda Popkin's Dead Man's Gift (1942) was a marked improvement over her slapdash performance in Murder in the Mist (1940) and Kay Cleaver Strahan's Death Traps (1930) made the award-wining Footprints (1929) look even worse in retrospect: it's as if we have entered a period of redemption!

Lets hope this trend continues and I will definitely check back on Downing. All of his books have been reprinted by Coachwhip and have an introduction by Curt Evans (a.k.a. The Passing Tramp).

This also reminds me how horrible behind I am on my reading and working off my wish list.
Geplaatst door TomCat on 3/08/2013