"I'm not the law, but I represent justice so far as my feeble powers go."
- Sherlock Holmes.


I cherished the hope that with the passing of another year, and the beginning of a new one, I could accelerate my reading pace, which has slowed considerably over the past month, but the first week of 2013 almost draws to a close – and I haven't even reached the halfway mark of the New Year mystery I have been reading. So, in lieu of a proper review, I have compiled a rundown of the fourth season of Leverage.

The fourth season successfully maintains the quality of the previous batch of episodes, and even ups their game, beginning in The Long Way Down Job when the team scourers an Alaskan mountain top for a missing climber and the evidence he was carrying to bring down a shady financier. We're also getting a glimpse of the main storyline that runs through all these episodes when they discover that their office has been bugged. Next up is an homage to the classics of yesteryear, The Ten Lil' Grifters Job, in which they infiltrate a detective-themed costume party at an cut-off, island mansion and Nathan (Timothy Hutton), dressed up as Ellery Queen as a nod to his father, Jim Hutton, who played the role in the 1970s television series, becomes the prime suspect when their mark is murdered during a black out.

Without question one of the most enjoyable episodes, but also disappointing in a way, because it just goes through the motions of the preconceived image people have of a classic whodunit and they missed a few opportunities (besides an actual clever plot a la Ellery Queen). While their hitter and retrieval specialist, Eliot Spencer, mingles with the guests hunting for leads, Nate is upstairs getting comfortable in his role as armchair detective, however, there's not a single allusion to Nero Wolfe and Archie Goodwin – in spite of the fact that Hutton played Archie in what's perhaps one of the best adaptations of a detective series that ever graced the small screen. And how neat would it have been if Nate or Sophie had said the following lines into Eliot's earpiece, "where force fails, craft succeeds." Kudo's to anyone who gets that reference!

Character-wise, the most interesting episode of this season was perhaps The Van Gogh Job, in which the stories of Hardison and Parker run parallel with that of their client and involves a lost Van Gogh that was smuggled into the country after the war. The Massive Lady would have probably described this one as a love story with criminal interruptions. The Grave Danger Job continues to develop the relationship between Hardison and Parker when the former ends up being buried alive during a con on a family of undertakers, who swindle their clients and sell the identities of the deceased to a drug cartel, and they have to race against time to find him – as well as finishing what they started! The Boiler Room is another fun one, in which their mark is a third generation conman whose family invented half of the tricks in the book and how do you con a man who was brought up by the men who invented the game? Well, you play a game that he isn't familiar with and we learn the identity of the man who's being spying on them. 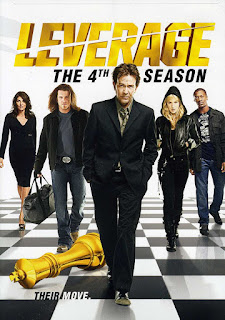 The Cross My Heart Job has the team opposing a wealthy, but terminally ill, man who stole a heart that was donated to an ill 15-year-old boy and Nate, who lost his own son at a young age, takes this job personal – very, very personal. At the end, we get a peek of evil Nate. Evil Nate is fun. Mischievous, but fun. The Queen's Gambit Job is a bit lighter in tone, in spite of the job that consists of stealing a nuclear centrifuge calibration weight from a highly secured skyscraper in Dubai, during an international chess tournament, which they do as a favor to Sterling. As to be expected from his involvement, there will be double-dealings and crosses adding to the overall fun. Nate and Sophie are also developing a relationship, and from what I have seen of the next season, they're turing into one of those flirtious, comical husband-and-wife sleuthing teams. Except that they grift and steal things.

The Girls' Night Out Job and The Boys' Night Out Job take place on the same evening when the girls (in the company of grifster Tara from the second season) and boys take an evening off to relax and enjoy themselves, but the girls end up tailing a good looking, internationally wanted man into an embassy and the boys have to try to keep a former mark they helped from getting killed by drug dealers. I think the night out with the boys was more fun and exciting. I mean, how could the other episode beat dropping Nate in the middle of an AA meeting? You simply can't!

In a previous episode, Hardison expressed his desire to run his own crew one day and began to notice that he was slowly growing into the Danny Blue of the group. The Gold Job is the next stage in becoming the next big con artist when he leads a job against a pair of lecherous gold dealers and plans to write a new page in the playbook of the modern conman. Luckily, his team has his back on his first outing as the leader of a pack. By the way, how awesome would it be if they put together a new team consisting of Hardison, Danny, Stacie, Parker and Eliot under the title Leverage International. Or Hustling for Leverage, if you want both shows in the title. It would also be a perfect vehicle to bring Nathan Ford and Michael "Mickie Bricks" Stone together. It would be like Lt. Columbo meeting Adrian Monk! Now, that's not too much to ask, is it? 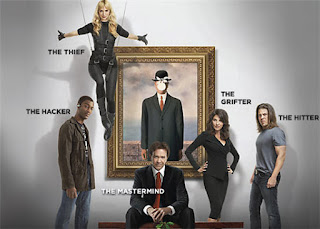 Yes. Every time I devote a post to either Leverage or Hustle, I'll mourn the fact that a crossover will never breach the boundaries of fantasy. Deal with it.

The Radio Job and The Last Dam Job make up the final, two-part episodes of the season and has the team up against the man who bugged their office and an old enemy from the past – who wants to extract his own kind of justice on them for putting him away and bringing down his company. In The Radio Job, another familiar face pops-up, Jimmy Ford, who attempts to steal a document from the patent office, but things go array when law enforcement encircles the building. Nate pulls off an impressive con to get them out of there, but his old man has a trick up his sleeve and gets away with the patents – and he isn't getting much in return for his trouble.

SPOILERS (select text to read): I know this is suppose to be his send-off, but if the series wasn't cancelled, we would've seen Jimmy Ford rise from the dead. Remember, Jimmy Ford is an old-time grifter and fixer who runs with what he's got (as witnessed by his crafty, but simple, escape from the patent office), and he has good reasons for wanting people to believe that he's dead (see: The Three-Card Monte Job). And what we hear doesn't always align with what we see.

The Last Dam Job tips it hat to the final confrontation between Sherlock Holmes and Professor Moriarty, as the team has to recruit allies to mislead the one adversary who knows all their tricks, and thus we get the return of the master-thief Archie Leach, Parker's "father" and mentor, and the hacker "Chaos," but you guess what I was thinking when these characters were re-introduced. Yes. What a great way it would've been to bring in the Hustle crew.

Anyway, there is a final, well-played confrontation at a dam that is very reminiscent of the scene at Reichenbach Falls (despite the modern scenery) and we have Ford holding his opponents at gunpoint (with his father's revolver) on the edge of the proverbial cliff. The main point of suspense is how he's going to deal with these powerful, relentless opponents and if he will go over the cliff himself by becoming a murderer.

I know I skipped a few episodes, like the wonderful The Hot Potato Job, but it has become a lengthy post as it's and I think these snippets did a sufficient job at conveying my enjoyment over the sustained quality of the stories and characters that have really grown on me. When I first blogged about this series, I thought it was a cut below Hustle, but Leverage upped its game, and now I think they bowed out on equal footing.

One more season left to go!