On the Dragon's Tail

"The way all the creatures argue. It's enough to drive one crazy!"
- Alice (Alice’s Adventures in Wonderland, 1865)

A perusal glance at the ever expanding quantity of impossible crime fiction, discussed on here with accelerating regularity, persuaded me to go easy on the old hobby horse and mix things up a bit. But the book I fixed upon, for a much-needed change of pace, almost feels out of place on this blog and it still concerns an impossibility depending on your criteria. After all, it's a wild goose chase for a missing dragon on Valentine's Day! 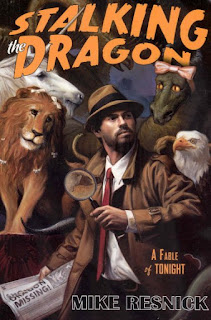 Mike Resnick was an unfamiliar name to me when I chanced upon Stalking the Dragon: A Fable of Tonight (2009) at the Boekenfestijn (Book Fest), where excess stock is disposed of at bargain prices, and I have to admit, I was drawn to this book by its fantastic cover illustration – evoking an image of Who Framed Roger Rabbit (1988) set in the Land of Oz. I simply had to own a copy! By the way, I checked up on Resnick and he's a huge name in the SF/Fantasy genre, sweeping up five Hugo Awards during his career, and producing a steady stream of fiction since the late 1960s. All in all, an image of a modern-day fictioneer.

John Justin Mallory is an old-fashioned gumshoe with an ample supply of snappy comebacks, who made his first appearance in Stalking the Unicorn (1987), in which an elf named Mürgenstürm transports Mallory to an alternative Earth in order to find a stolen unicorn. I want to read that book just to watch a less jaded Mallory interact with the fairytale world he suddenly finds himself in. It oddly reminds me of the premise of the BBC series Life on Mars (2006/07), in which a modern day policeman awakes in the early 1970s of his childhood and has to adjust himself while figuring out what's happened to him. One of the few modern, character-driven crime series I enjoyed watching and first season was solid gold.

In Stalking the Dragon, Mallory has already adapted himself to his new surroundings and it hardly surprises him when a distraught client, Buffalo Bill Brody, engages him to find his tiny dragon, Fluffy, who's the heavy favorite for the Eastminster pet show to be held the following day. Mallory suspects Brody's competitor Grundy, a powerful demon, and plans to make quick work of the case, but Evil Incarnate fancies himself a sportsman and doubles Mallory's fee if he can bring back Fluffy in time – and it's during this nocturnal quest that mystery and fantasy tropes really begin to intermingle. It should also be noted that Grundy knows what really happened, due to his demonic powers, but refuses to help Mallory in order to keep things fair. Well, that's one way of dealing with supernatural beings in a mystery.

Anyway, when the case began, Mallory was accompanied by just Felina, resident office cat-person, a walking appetite with a penchant for mischief and one of my favorite characters in this book, but along the way they begin to pick up an assortment of characters that any other sane person would've left at the side of the road.

Would you have picked up Dead End Dugan, professional zombie and slowest thinker on the otherworldly side of Manhattan, a cell-phone named Belle, who constantly tries to seduce Mallory, or a samurai sword-wielding goblin? But together they tramp those mean streets like Dorothy, Scarecrow, Tin Man and Cowardly Lion strolled down the yellow brick road and just as in the journeys of Atreyu (The Never-Ending Story,1979) and Stach (Koning van Katoren, 1971; translated as How to Become King), they visit many memorable sites. My personal favorite was the neglected wax museum where the figures of Peter Lorre, Sydney Greenstreet and Humphrey Bogart are perpetual hunched over a statue of a bird – occasionally coming to life to threaten and scare any lost soul who wandered in by mistake.

On a whole, Stalking the Dragon was an enjoyable read and can be classified as a proper detective story, adhering to the basic structure and keeping the fabulous abilities of imaginary creatures out of the explanation also helped a lot, but the overall plot hardly poses a challenge to a seasoned reader of whodunits. It's something to bear in mind, but not something that should deter you from reading the book. Resnick obviously wrote it to amuse his readers and not to baffle them. I think he succeeded in doing so.
Geplaatst door TomCat on 10/21/2012