A Can Full of Criminal Intent

"If there were no bad people there would be no good lawyers."
- Charles Dickens.

Erle Stanley Gardner’s The Case of the Empty Tin (1941) opens with a peek behind the curtains of Mrs. Gentrie's home life. The household is homey, domestic and cozy. A tea-kettle whistles a familiar tune on the stove, mending work is loitering in a basket and her family gives the place the buzz of life. A charming and tranquil domestic scene, which takes a turn for the worst when Mrs. Gentrie finds an empty, unlabeled preserve tin in the cellar with a coded message scratched on the inside and this opens the proverbial can of worms: disturbances in the night-time and shots fired next door – and that's just for starters. 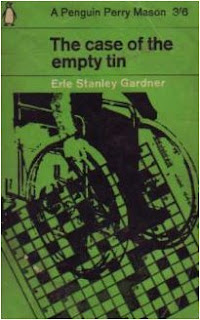 Their next door neighbor and ex-gunrunner, the wheelchair bound Elston A. Karr, enlists Perry Mason to keep him out of this mess and clean up the shooting incident in the apartment, one floor, beneath him before it becomes a nuisance that interferes with his business – willing to sign his name on the dotted line of a fat, but reasonable, paycheck if he succeeds. But there's one snag: no body! The tenant who lived on the first floor, one Red Hocksley, went missing and only left a few puddle of dried-up blood behind as silent witnesses, but their testimony becomes muddled when the name of his housekeeper, Mrs. Perlin, also finds its way onto the list of missing persons.
It's been so long since I read a Perry Mason novel, that I had completely forgot how fun and sharp they could be.
Mason acts here more as a detective-cum-lawbreaker than as an attorney, which was of assistance in piling up the fun as he diligently exposed hidden relationships, concealed clues and compounds one felony after another as he, for example, neglects to call the police to inform them that he has just stumbled over a body – an unwanted chore he leaves for his private-eye buddy, Paul Drake. There's also a good and amusing scene, in which Mason and his secretary, Della Street, are caught during a not so very legal sneak-and-peek operation (read: housebreaking) and brush the cop off after winning a one-sided game of bluff. However, this has one downside: the case never enters a courtroom and deprives Mason of an opportunity to showcase his legal sleight-of-hand, but hey, you can't have it all.
You could make an argument that its actual weakness is a somewhat contrived plot, but with the recent memories of more than just one dud, ricocheting around in my head, I found myself able to appreciate its intricacies. As convoluted as the plot may be, the clues were all on display and should enable you to catch on to the truth before turning over the final page.
I know this post has more of a resemblance to a brief synopsis than to one of my usual rambles, presented as an in-depth review, but I did not want to ruin any of the plot twists you would encounter for yourself if you ever decide to pick this one up – and I think this demonstrates how variegated the plot really is and how much fun I had reading this story. On the other hand, it  made writing this review somewhat of trial. I really had to drag out the right words for this short piece.
The Case of the Empty Tin is an engaging mystery with a busy plot that plays absolutely fair with everyone willing to take a shot at whodunit. Because of that, a pretty solid effort from one of the most prolific mystery writers from the previous century.
On a final and not entirely unrelated note: Jeffrey Marks has set-up yet another mystery blog entitled The Corpse Steps Out. Marks wrote several autobiographies of some well-known mystery writer from the Golden Era and at the moment he’s working on a book that tells the story of Erle Stanley Gardner.
You can also watch and hear Gardner in this black-and-white video clip of the game show What's My Line?
Geplaatst door TomCat on 4/06/2012