Liquidation of a Businessman

"X. The unknown quantity, who may upset all our calculations. It's fatal to forgot him. Whenever you make a list of possible criminals, you are apt to put yourself in the blinkers and forget that anyone exists outside of your list. Always put in X, and keep a sharp look-out for him."
- Inspector Mallett (Tenant for Death, 1937)

"Cyril Hare" was the adopted pseudonym of Judge Alfred A.G. Clarke, who drew liberally from his education and professional background for his mystery novels. Clarke had studied law as well as history and was called to the Bar in 1924, where he worked as a barrister in the criminal courts, until the outbreak of World War II – during which he served as a judge's marshal. In 1950, Clarke became a judge and traveled the court circuit. A "gig" that was at the heart of what many still consider to be Hare's masterpiece, Tragedy at Law (1942), which I would recommend for the portrayal of the life of a Circuit Judge alone. 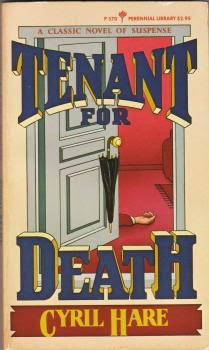 Tenant for Death (1937) was the first to appear under the Cyril Hare byline and plays on the motif of the shady financier that gained popularity in the years following the Wall Street Crash of 1929. In a way, Tenant for Death is a bit different from other Hare mysteries I have read, because the resolution wasn't a matter of law or hinged on a passage from history. There is, however, a clever piece of misdirection revealed in its conclusion and, while it's a dry read at times, the story displayed what we'd call today a social conscience – which translates in bits of social commentary and subtly showing the difference in lifestyles between the poor and rich.

Nevertheless, judging by the story's content, I doubt Hare's political sympathy was with the left. There's an amusing scene, in which a communist lorry driver picks up one of the characters (ex-jailbird), but when the driver finds out his passenger is wanted for questioning he dumps his comrade in the middle of nowhere. In the pouring rain. Leaving him with nothing more than the clothes on his back and an empty tin jug. Hare saw the social problems of his time, but a solution uttered by one of the other characters, on how it's good for young people to do Empire Building in Kenya instead of loitering in the Old Country, would be considered politically incorrect in today's world.

Anyhow, enough of the background noise in Tenant for Death and lets turn to the plot itself, which focuses on the business endeavors of Lionel Ballantine, the mystery man of financial world, who balanced his businesses between a dozen different companies – known as the "Twelve Apostles." Unfortunately, Ballantine's business model has stopped working and disappears before everything comes crashing down around him. Ballantine's escape, however, ended in a dingy, obscure place called Daylesford Gardens, South Kensington. Two estate agents checking the inventory of the house discover the strangled remains of Ballantine in the smoking room of the house. A newspaper saw the previous tenant, Mr. Collin James, enter the building with an unknown man, but left the place by himself.

Enter Inspector Mallett, whose unraveling of the case is a slow, meticulous yet satisfying process, but the downside is that it slackened the pace of the story considerably. On the other hand, Tenant of Death balances plot, detective work and characterization satisfactory and Hare allows the reader to drift on a treacherously slow tempo towards the final chapter – where he took me by surprise. And about the opening quote, I think Hare should've gone with The Unknown Quantity as book title. It fits the story better and does justice to the clever solution.

I should probably also reference Trent's Last Case (1913) by E.C. Bentley, which is an obvious comparison made before, but thought Tenant for Death shares some common ground with Nicholas Blake's There's Trouble Brewing (1937). Not just for their political tone, but also in the kind of (detective) problems they explore in different settings and explanations. And, interestingly enough, they were both published in the same year.

Tenant for Death is a solid, but slow moving, detective story and a better-than-average debut novel in this genre, which may prove to be treacherous grounds for smug and seasoned armchair detectives.

Lastly, if you're interested in giving this fox posing as a hare a shot, I would recommend the previously mentioned Tragedy at Law, Suicide Excepted (1939) and An English Murder (1951).
TomCat on 8/03/2014
Share